May your drinks cabinets never be empty in 2012!

Spartan Games have released some concept pics of their new range of DW models: the Republique of France:
The dawn of the 19th century brought with it a series of catastrophic events that stripped France of its status as an imperial power. Having reached, as they saw it, the very lowest depths of despair, the French spent the following decades dedicating all their efforts into rebuilding their nation and its glory.
Now, as the 1870s dawn, and the world is gripped by crisis, France sees at last the chance to regain its rightful place as a great power. The self-satisfied, naysayers and complacent, at home and abroad, who in the past have sought to write off the Republique's fortunes are soon to be proven very wrong.
The French military forces are split into three services: l'Armee de Terre, l'Armee de Mer and l'Armee de l'Air: literally, the Armies of the Land, Sea and Sky. The Navy and Air Forces also include their own integral marine forces, known as Mousquetons, after the compact automatic carbines that are their main armament.
L'Armee de Terre is split into the Regular and Reserve Armies and the Heavy Assault Command. The Regular Army is formed of Armoured Regiments; each incorporates its own artillery and infantry elements. The Armoured Regiments form the backbone of the Land Army.
The French Navy is divided into three fleets: Atlantic, Channel and Mediterranean, with the strongest forces assigned to the latter two. The Navy also incorporates its own aerial element, the Maritime Air Force, which is responsible for the fighter and light bomber squadrons employed on the Navy's battle-carriers.
The third of the Republique's armed services is the most glamorous and also very cosmopolitan. The French air service, focussed as it is on France itself, employs large numbers of conventional short ranged aeroplanes, organised into fighter and bomber squadrons (escadrons de chasse and bombardier respectively) grouped within Air Combat Wings. This part of the air force also incorporates the heavy bomber squadrons.
Posted by Paul O'G at 4:57 pm No comments: Links to this post

The move is now completed, with only minor damages.
Looking forward to re-establishing production soon! 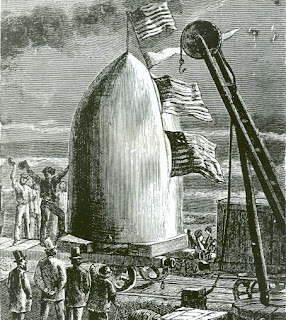 Posted by Paul O'G at 5:24 am No comments: Links to this post

Merry Christmas One and All!

Best Wishes for a safe and Merry Christmas to All! Yes, time for my biennial relocation of the Man Cave and its associated factorium.
Will be offline for a bit, but will advise when my drinks cabinet has been firmly re-established! 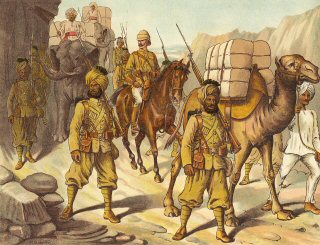 
Welcome to the start of our range of Land Ironclads (and by extension, Aeronef) terrain.

Rules for Aeronef can be found in issue 42 of Ragnarok if you're able to get hold of a copy. (and yes, I have a copy!) 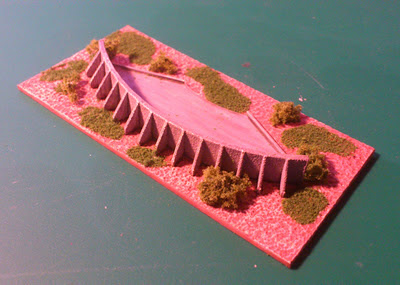 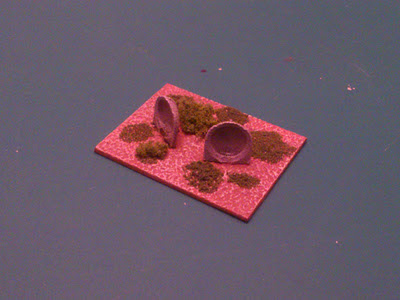 http://www.brigademodels.co.uk/LandIronclads/Terrain.html
Posted by Paul O'G at 3:03 pm No comments: Links to this post

View Halloo Chaps! With the cook busy making some festive brandy pies and basting the goose under the Memsahib's careful instruction I retired after a lunch of crubeens and beetroot to the study and was browsing the interweb on my personal Babbage Machine when I discovered a new business organisation in the Little Wars market called Troublemaker Games.

Perusing their wares it appears they make available for purchase tiny models in what is known as 10 mil scale where the little soldiers are apparently just 10mm tall (one must confess that I am not quite sure what 10 mil is, sounds bloomin' Froggy to me, but apparently it is just under 1/2 an inch so bally small eh what?). Their range is some form of Wells inspired Land Ironclads scientific romance type with stalwart British types fighting the beastly Hun! 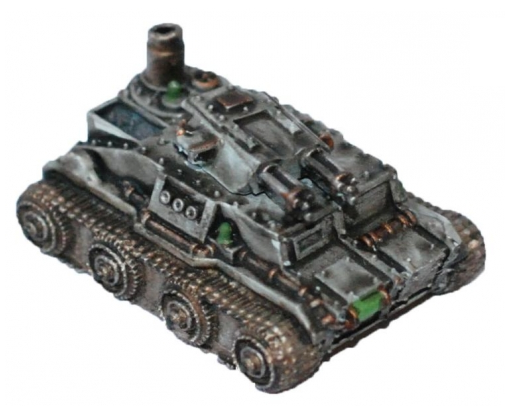 If one is quick one could get the man servant to purchase some for you before the festive period and snowy weather. Pip Pip!Ho!
Posted by Steve at 12:07 pm 4 comments: Links to this post

Horns of the Buffalo 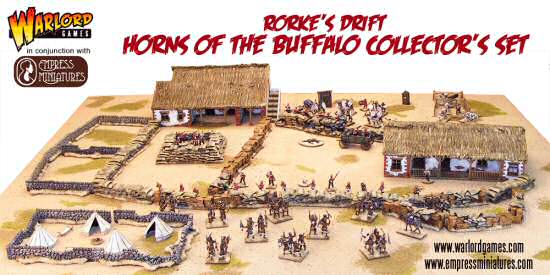 If you are serious about getting into the 1879 Zulu War, and can commit to a bit of painting!, then you may be interested in this figs and terrain mega-set from Warlord- if you get stuck into it over Christmas you might even be ready to play on the Anniversary of the battle next month!!!
http://www.warlordgames.com/14631/new%C2%A0horns-of-the-buffalo-rorkes-drift-collectors-set/
Posted by Paul O'G at 4:53 pm 1 comment: Links to this post

You may be interested to know that there is now a "Yours in a White Wine Sauce" page on facebook, which sends a telegram or some-such to your man servant to tell you something has been posted here.

Come along and join in the mess games! 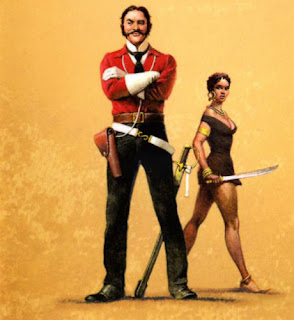 Posted by Paul O'G at 8:01 am No comments: Links to this post

A 're-imagined' version of the War of the Worlds Musical? By Liam Neeson?
http://www.sfcrowsnest.com/articles/news/2011/Liam-Neeson-in-new-War-of-The-Worlds-16411.php 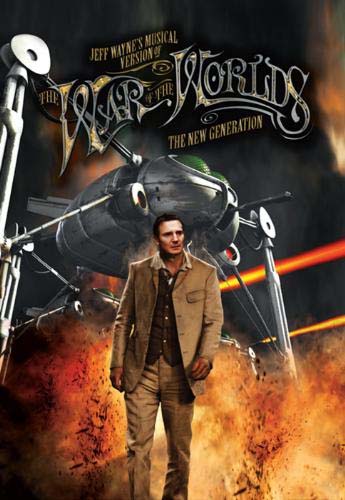 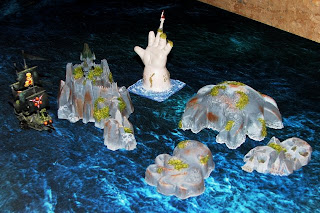 Back to work at last, and here are some islands, two from the Dreadfleet set, two improvised from discarded beach toys. At the rear is the dreaded 'hand of Neptune', actually a rather creepy doll hand reaching our from the sea. My VSF ships are still not deployed after the move to my new headquarters, so I had to borrow an old Man O' War ship to set the scene. The 'water' is the Dreadfleet mat, which in defiance of my original scepticism works quite well.

Now where are my ironclads......
Posted by Vanmullikan at 12:59 pm 2 comments: Links to this post

Gentlemen, and boys of a certain age and intelligence, will be pleased to learn that those wallahs at Warlord Games have released a Rorke's Drift play set complete with buildings, loads of blooming zulus and some stout redcoats so one can recreate the heroic battle using Well's Little Wars on the dining room table with a port once cook has cleared away the Christmas goose... 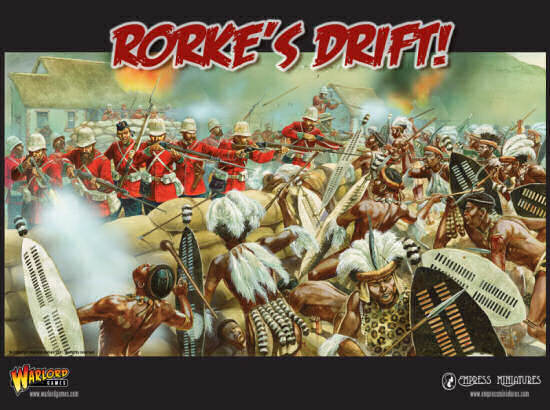 One can also send one's servant out to purchase more brave redcoats which will be damned useful for chaps paying Little Wars games against other nefarious foes such as the bally French or Martians.
Posted by Steve at 7:47 am No comments: Links to this post

The Photojournal of Surgeon Parks, RN

The Imperial War Museum now has wonderful online photos attributed to renowned Surgeon Oscar Parks taken during WW1.
He was a RN medical officer who became the editor of Jane's Fighting ships in the 20 and 30s).  These are just a few of my favourites.
http://www.iwm.org.uk/collections/search?filter%5BmakerString%5D%5B0%5D=%22Surgeon%20Oscar%20Parkes%22&query= 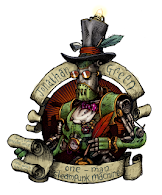 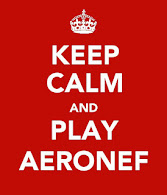