...according to Steve at Brigade Models, the release should be announced next week!

For most of us, these will be the wrong scale. But perhaps your navigation today will take you for a visit to this shipyard:

A selection of 1/600 scale VSF paper models will be found there.
Posted by Zophiel at 11:09 am No comments:

The Zeppelin Destroyer : being some chapters of secret history

This book reflects Le Queux's paranoia during the war years with British national security at grav risk, and the potential utility of secret services in furthering the aims of 'total industrialised warfare'.

Its listed with other great books featuring dirigibles here: http://spot.colorado.edu/~dziadeck/airship/fiction.htm
Posted by Paul O'G at 4:25 pm No comments:

I have just learned of a movie planned for a 2010 release. For an early visit to Venus, go here: http://www.piratesofvenusmovie.com/index.html
Posted by Zophiel at 9:43 pm 4 comments:

Not to be outdone by random crytomundians, Mssr Vanavlak has made an initial foray into uberlarge game hunting: 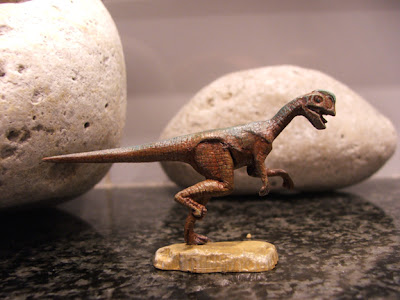 A long-started model completed. A dino (Compsognathus? Can't remember) and a tough (the latter is an old model; the former just finished). The dino comes from an attractive set of 5 dinosaurs and a very bic croc from Tamiya - quite cheap but nicely detailed. The tough is obviously ex-Necromunda. 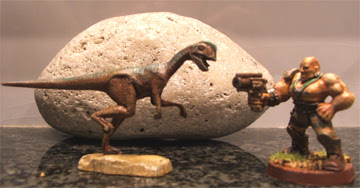 ...things just got a bit complicated on the Russian side! 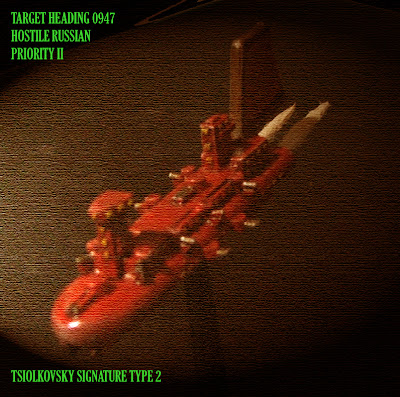 Krazniy Oktyabr, modified with Tsiolkovsky type 2 drives and taken over by the Communist insurgents. 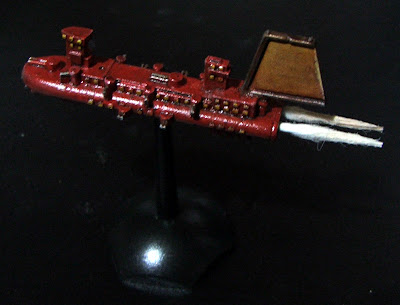 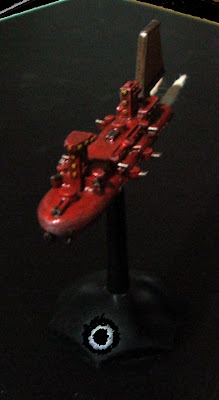 This is an adventurous tale of a man in a fedora in pursuit of living dinosaurs (Mokele-mbembe), three-toed primates (Dodu), and his next mission.
http://cryptomundo.com/
He has even written a book on the subject:
The Field Guide to Lake Monsters, Sea Serpents, and Other Mystery Denizens of the Deep(NY: Tarcher/Penguin, 2003)http://www.amazon.com/gp/product/1585422525/ref=ase_cryptozoologi-20
As a late, well known countryman of mine would have said: "Crikey!"
Posted by Paul O'G at 8:11 pm No comments:

The original WOTW radio broadcast is now on YouTube with a CGI backdrop!

On Shooting the Moon...

Although it does not pertain to painting in any scale or wargaming (apart from the most indirect of comparisons), I'd like to share with the community here something our host Tas and I have discussed at length in private chats.

The following is my first video post to YouTube. I believe viewing and sharing improves all our chances of seeing a rational centrist in the White House. Please reserve comments for the YouTube channel, instead of here — but share it as widely as you can, please.

A Visit to the Moon

another piece of classic Astronef style fiction, from 1899!

A Visit to the Moon
by George Griffith

An Account of the Adventures of the Earl of Redgrave and his Bride on their Honeymoon in Space:

Well, we shall see a good many marvels. and, perhaps, miracles, before we come back, but I hardly think we shall see anything that is forbidden. Still, there's one thing we shall do, I hope. We shall solve once and for all the great problem of the worlds--whether they are inhabited or not. By the way, he went on, "I may remind your ladyship that you are just now drawing the last breaths of earthly air which you will taste for some time, in fact until we get back!

Visitors from around the world

This week marks 2 months since I started the hit counter here at WWS (purely out of interest) and I must say that with 7500 hits so far I have been astounded.

What you may have also missed is that at the bottom of the left hand frame there is a Mapper which shows where traffic originates. Out of interest, I have been taking a snapshot of this traffic map every two weeks and it showed some very interesting results.

So thanks to everyone who has visited WWS and and especially those who have left us comments - we appreciate it!
Posted by Paul O'G at 12:07 am 1 comment: 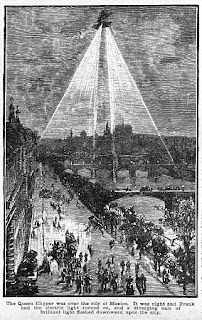 Robur the Conqueror
by Jules Verne
Alternate English titles include "The Clipper of the Clouds", and "A Trip Around the World in a Flying Machine"
This book, published in 1896, is one of THE top Aeronef classics.
If you havent read it yet, stop whatever else you are doing and click here:
http://www.classicauthors.net/Verne/Conqueror/
Posted by Paul O'G at 7:30 pm No comments:

The Airship is Coming!

A really interesting site by the Danish Post and Tele Museum in Denmark, who has published a wonderful online exhibit about zeppelins

Martians, cylinders and green flashes in the sky

Scientists are only now getting the evidence to prove what we already know...Mars is inhabited!!!

And are these the holes that remain after theose terrible projectiles were fired with a green flash?

for all your "Extraordinary Submersibles and Diving Equipment" needs, including vintage scuba gear, Nemo's helmet, a working underwater Nemo Rifle and the Journal of Professor P. Arronax!
http://www.vulcaniasubmarine.com/
Posted by Paul O'G at 8:10 am 1 comment:

The above image shows the collapse of the Ottoman Empire to nearly-modern Turkey. The animation runs from 1870 to 1923 and displays British, French, and — eventually — Italian territories as the Turks decline. The original images were taken from the WHKMLA Historical Atlas - http://www.zum.de/whkmla/histatlas/asia/haxwasia.html - which may be the most useful collection of summary maps I have ever discovered.
Posted by Zophiel at 6:43 am No comments:

You may recall that I moved house deeper into the Hindukush earlier this year. Well that campaign is drawing to a close so its time once again to pack up the baggage train and move encampments.

I'll be offline for about a week, but thought I would leave this with you to ponder. I realise that USS Constitution was an American ship, but would guess that things wouldn't have been much different under a different ensign! 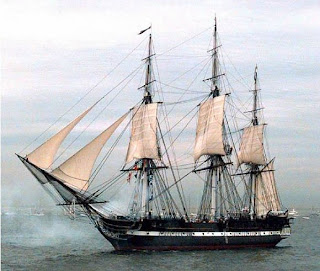 Her Mission: to destroy and harass English Shipping

On 6 October, she made Jamaica, took on 826 pounds of flour and 688,300 gallons of rum. Three weeks later, Constitution reached the Azores, where she provisioned with 550 pounds of beef and 300 gallons of Portuguese wine.

On 18 November, she set sail for England where her crew captured and scuttled 12 English merchant vessels and took aboard rum.

By this time, Constitution had run out of shot. Nevertheless, she made her way unarmed up the Firth of Clyde for a night raid. Here, her landing party captured a whiskey distillery, transferred 13,000 gallons aboard and headed for home.

On 20 February 1780, the Constitution arrived in Boston with no cannon shot, no food, no powder, no rum, and no whiskey. She did, however, still carry her crew of 475 officers and men and 18,600 gallons of water.

The arithmetic is quite enlightening:

Naval historians note that the reenlistment rate from this cruise was 92%.

LOGISTICS LESSON LEARNED: Don’t load up with too much water
Posted by Paul O'G at 8:08 pm 1 comment:

I spent all weekend painting my new house before I move this week (yes, its another gangantuan effort to move my drinks cabinet 6" closer to Berlin"!).

After about 8 hrs on the second day, I started making a mental list on why painting this 1:1 scale models appeared harder than the 2mm and 6mm scales I'm usually happy to do.

In no particular order:

Got others of your own? Please leave a comment!

Here: http://atkinswargames.16.forumer.com/viewtopic.php?t=110
Note the vital accessory in the background, just my kind of gaming - Cheers! 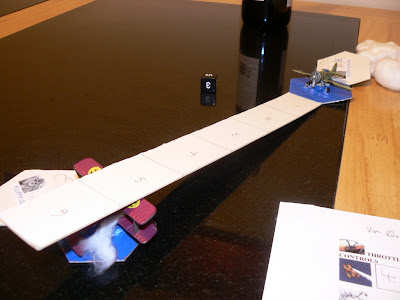 Its a bit more fanasty than VSF, but it does have a flying vessel, aeronauts and aerial adventures so its OK by me! 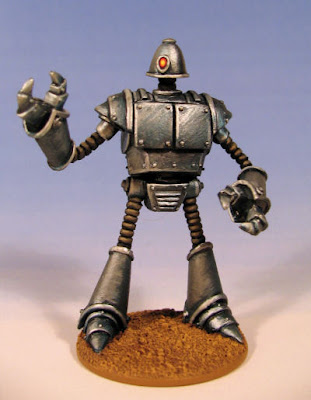 
I particularly like the 'gleaming red eye of death' style, which reminds me of the psychotic computer HAL from the classic movie "2001: A space Odyssey"


I think it has loads of potential as a VSF Iron Giant. Cant wait to get hold of one for my Mad Scientist army!

The above illustration shows the Huala Frigate by Ninja Magic (With Hostile Intent line). I've just pressed one into service as an Anarchist's Nef.
Posted by Zophiel at 9:25 pm 1 comment:

It recently occured to us that there were a few early pieces of Vanvlak's work that were completed before WWS began, and thus havent been seen here before.

Here are some of the 'lost works': 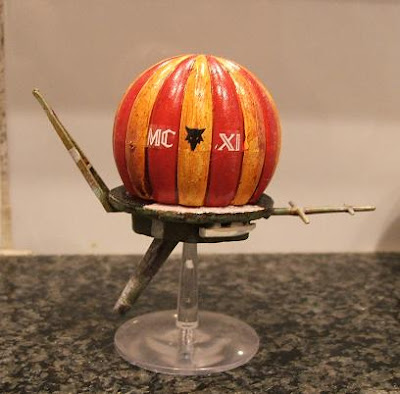 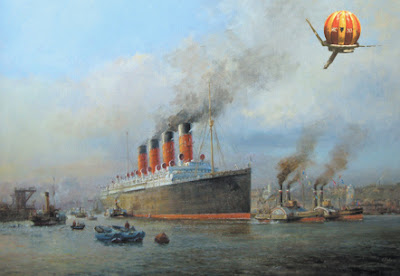 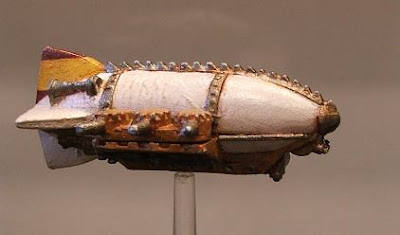 The Sainta Barbara, of the Venerable Knights of Malta's Air Fleet 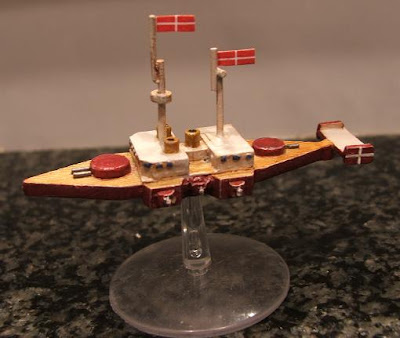 Every VSFer worth his salt needs one of these or something similar! 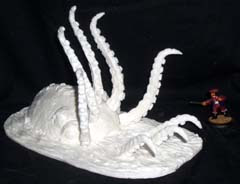 The Kraken, by Black Cat Bases, is part of their Pirates of the Skeleton Seas range,

The Kraken is 135mm tall to the tip of the tallest tentacle, and the base is 115mm wide and 200mm long. Supplied as a multi-part kit - the 8 tentacles are separate to the body. The whole model is resin.

A paper on the Nautilus...

It is — at times — quite a surprise what can be found when one is looking for some entirely different thing.

http://jleslie48.com/0305n/ETHtml01.htm
The model is fantastic and very well designed. I imagine it will take several attempts before a satisfactory build results, but that's one of the advantages of a paper model. :)
Posted by Zophiel at 6:28 pm No comments:

Philosophical endeavours may still fail us at preventing armed conflict with our neighbours but technological advances may promise a decrease in loss of life as our wake through this century grows ever longer. The most important question is, how many will you order?

They're finally online and active with a shop.
Posted by Zophiel at 6:57 pm 2 comments: 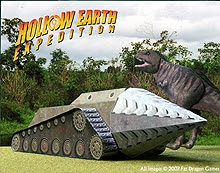 Dont sod about climbing down extinct volcanoes looking for a way down into the Hollow Earth - bore your own! With this new Terranef from Fat Dragon games, you'll get there quicker than ever before!

And think of the possibilities on the battelfield...does your limted air cover have those enemy dirigibles smashing your assault troops before they even get near the enemy? Pack your boys into one of these and drive them right under those trenches! 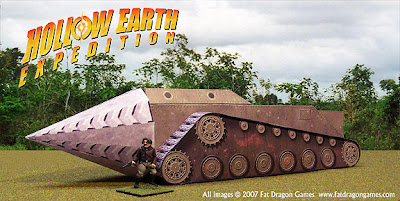