"We come on the orders of the Great White Queen!"

As promised, here is the British and Boer forces for the Zulu war.  The British Cavalry bore the worst of the damage to their lances and swords but otherwise this whole thing is a testament to the wonderful Testors' dullcoat - and always use two coats! The lad helped me build this - my first wargaming video. Its a but self indulgent but it was fun to make For those who prefer stills, here are the key ones.
Hoping to get them onto a table for some action shortly!

This is a post some 24 years in the making. Some time ago I quite enjoyed Colonial gaming and the Zulu War was my conflict of choice.  Some mates and I put together armies in 15mm and had a great time.  Early in 1994 I had a major life change and the figs were packed away.  I've since moved house some 18 times and the figs have remained unopened; the awful noises that came from the box made me shy away.  Then last week when there was interest at the club about doing some Colonial gaming and I realised I (might) have all the figures.  Depending on how they fared at least. Here is what greeted me once I plucked up the courage to open the Zulu Box...
And after 23 years this was the sum total of damage - other than bent spears and knoberries which needed reshaping 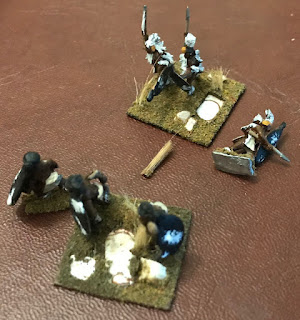 The vast majority of these figs, if not all, are from Essex 15mm colonial range
And if one of going to cross the Buffalo River into Zululand, you need some terrain to fight over right?
Next Up: The British and their Boer allies.