The original classic is back - Huzzah indeed! 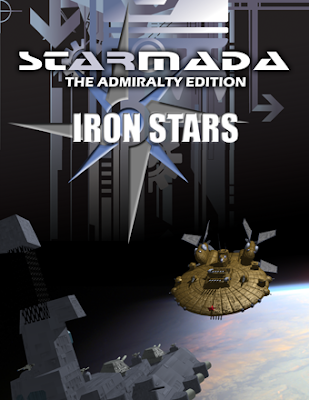 Majestic Twelve Games is proud to announce the release of Starmada: Iron Stars -- a "crossover" product linking together two of our most popular gaming systems.
http://www.mj12games.com/forum/viewtopic.php?f=11&t=1774
Posted by Paul O'G at 6:42 am 1 comment:

CanCon report - the Defence of Melbourne 1887

Well, what an awesome weekend!

Australia Day long weekend is the time when CANCON is held, less than 5 km from my house.
And my two best mates came into town from Adelaide and Melbourne to enjoy it and we had a blast.


Saturday all day at CANCON playing games, then a full day at my place playing various games on Sunday. More on all this later.


The Defence of Melbourne 1887 participation game (using The Sword and the Flame rules) at CANCON was brilliant! 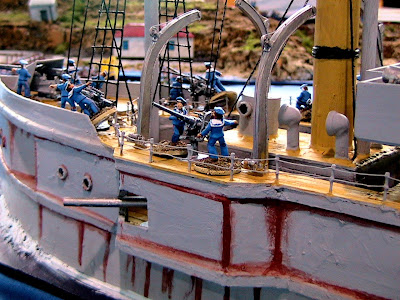 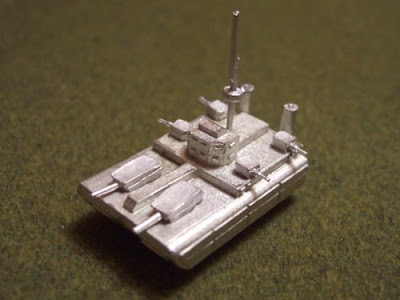 Hey, we're on a roll here ... (a Jam and Cream one, for Brigade aficianados !)
Four more new Land Ironclad models this weekend ... well, contraptions anyway.
Both the Brits and Germans get a turreted Contraption (tank) and a troop carrier too.
Four new packs, all priced at £1.75 for eight models.
In addition, there's a battalion pack for each side - £13 for the British one and £13.50 for the Germans, reflecting the organisations in the rulebook.
See the website <http://www.brigademodels.co.uk/Frames/VLI/index.html> for more
Have a good weekend
Tony
Welcome news indeed chaps, but why does this happen right after I've made an order...again!
Posted by Paul O'G at 6:51 am 1 comment:

New Airships on the way from Spartan

Spartan and creating an "Airship Pirates" fleet for their Uncharted Seas fantasy naval wargame
(which I mentioned here: http://pauljamesog.blogspot.com/2008/10/vsf-ironclad-fleet.html )

They have released some WIP pics of thier first two Airship models: 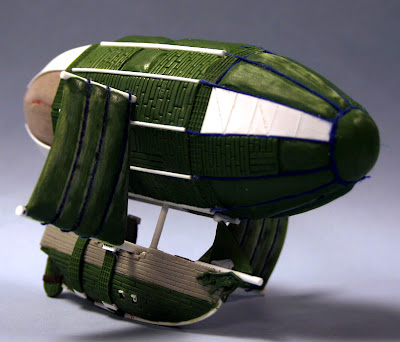 The Sky Pirates, as opposed to normal pirates, tend to favour a slightly different approach to using captured ships of the other races. 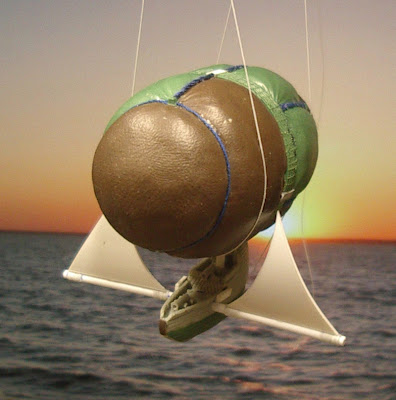 More posts to follow once the celebratory feasts are competed and local wenches stop throwing themselves at my feet (actually, that might not take too long...)
Posted by Paul O'G at 5:39 am No comments:

Indeed, it may not be as far as the polar regions of Antartica, but I'm off South for a week or so on an other adventure! Most posts upon my triumphant return! 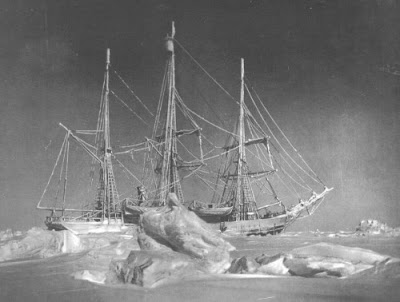 Is a vile neighboring country raiding your border areas?
Are his Aeronef pounding your defenceless infantry regiments in the open?
Worried his spearhead of Land Ironclads will break through your defences too easily?
Maybe you need...trenches, the very latest thing in warfare!

Don't just deploy your men standing in neat lines looking magnificent as the enemy charge you- burrow down and stay out of his fire. OK, it might get your uniforms dirty and it isn't quite cricket but it works and your claret will stay a nice, cool drinkable temperature out of the sun - marvellous!
Conveniently, Kallistra have just released a new range of trenches and earthworks in 28mm scale which you can find here:
http://www.kallistra.co.uk/
Posted by Paul O'G at 3:46 pm No comments: 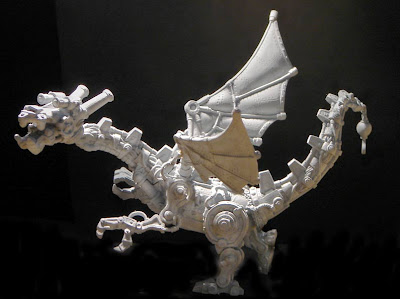 Nothing quite screams VSF as much as a cog and piston driven mechical monstrosity created by an mad genius and which is guarding his evil lair. Luckily, Armourcast have just released one for your modelling and gaming pleasure!

From the mind of Lux, Armorcast is proud to introduce the Stream Dragon. This coal burning behemoth can rend with its mechano claws, chew threw an ironclad with its hydraulic jaws and incinerate the occupants with the built in flame thrower in the mouth. Run in terror when you hear the hiss of steam and shriek of iron!. This multi-part kit is cast in resin and pewter. US$75.
http://armorcast.com/store/product_info.php?products_id=1013
Posted by Paul O'G at 5:06 am 3 comments:

Written for the PC game, Worlds of Ultima, this PC hint gamebook is a treasure trove of Lost Valley/Skull Island/Dino Hunting idea goodness!

I found these model space torpedos and missiles, made by Ninja magic.

Not that they are difficult to make (if one can be othered) but these would make excellent aerial torpedo models for Aeronef! 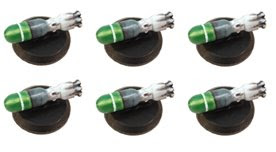 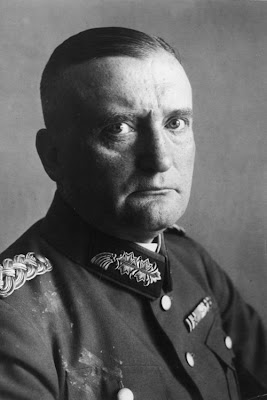 “I divide my officers into four classes;
the clever,
the lazy,
the industrious,
and the stupid.
Each officer possesses at least two of these qualities.”

- General Kurt von Hammerstein-Equord
.
"a German general who served for a period as Commander-in-Chief of the Reichswehr. He is famous for being an ardent opponent of Hitler and the Nazi regime"
.
from Wikipedia "
http://en.wikipedia.org/wiki/Kurt_von_Hammerstein-Equord

Labels: Gentlemen of Renown and Infamy


I'm putting together a free supplement for dinosaur/prehistoric gaming, and as part of that I'm complied a list of RPGs and miniature games focused on theme. I thought I'd share it here. I should point out these are games where prehistoric beasts are a major element, just not filler. That means several games that do have dinosaurs, but only as occasional monsters, were left out.

Free miniatures game about 19th century African exploration. Dinosaurs abound, and players can specialize in paleontology. The rules can be downloaded at http://nagssociety.com/resources/Jimland/Jimland.htm

(Note I advertised these rules in a post here: http://pauljamesog.blogspot.com/2007/11/adventures-in-jimland.html)

Based on the comics by Mark Schultz, Cadillacs and Dinosaurs is set in a post-apocalyptic world where jungles grow over the ruins of civilizations and prehistoric animals rule the landscape. The game uses the same rules system as Twilight: 2000 and has interesting ideas for mounting wilderness expeditions.

D20 space western set on a planet populated by dinosaurs, some of which have human-like intelligence.

Bestiary of dinosaurs that may have evolved had they not died out 65 million years ago.

Pulp fantasy setting where dinosaurs still roam in many parts of the world.

Perhaps the most comprehensive roleplaying supplement about dinosaurs so far written. Includes much material reprinted from GURPS Ice Age.

Guide to playing in caveman settings, from realistic Ice Age adventures to slapstick.

Campaign setting for the original D&D set inside a hollow world populated with dinosaurs and lost civilizations. Basis for the SEGA Genesis game "Warriors of the Eternal Sun."


Isle of the Ape: World of Greyhawk (RPG)
Gary GygaxTSR/1985

Yet another Skull Island adventure set in the world of D&D, this one for higher-level adventures than The Isle of Dread.

Perhaps the most comprehensive supplement ever written about putting together lost world adventures.

Rulebook for undertaking dinosaur hunting trips with a Victorian flare.

(Note I advertised these rules in a post here:
http://pauljamesog.blogspot.com/2006/12/lost-world-safari-tours_29.html)

RPG set in the Ultima universe but in a lost valley populated with prehistoric creatures and primitive tribes.

Alternate history game based on the premise that the inner planets of the solar system can all sustain life and are at different stages in biological evolution. Venus is a swamp-covered world filled with dinosaurs while life on Mercury is just starting to make the transition to land.

A miniatures game based on the caveman-and-dinosaur movies of the 1950s and 1960s. Uses the Savage Worlds skirmish rules.

Adventure from the D20 Thrilling Tales system with a giant pterodactyl taking the place of King Kong.

Simple rules system that allows players to play as dinosaurs instead of humans encountering dinosaurs.

(Note I advertised these rules in a post here:
http://pauljamesog.blogspot.com/2007/12/tooth-and-clawthe-rpg.html)

A rules system for launching Victorian hunting with prehistoric mammals as the game.

(Note I advertised these rules in a post here:
http://pauljamesog.blogspot.com/2007/11/new-prehistoric-animal-hunting-rules.html)

Alternate worlds setting with two worlds based on the lost world genre.

A roleplaying supplement for the TMNT series focusing on time travel and introducing a variety of prehistoric beasts.

Rules for hunting mammoths and other prehistoric creatures.

(Note I made a post about these rules here:
http://pauljamesog.blogspot.com/2008/11/tusk-pics-posted.html

Rules for playing pulp skirmish games against dinosaurs and other strange creatures.


Many thanks to Walt for his work in compiling this list and sharing it!
Posted by Paul O'G at 3:03 pm 3 comments: 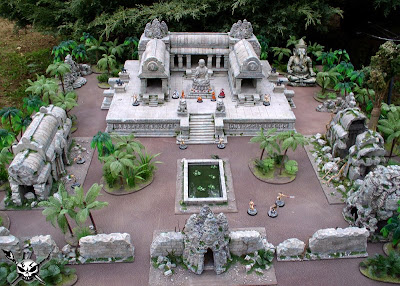 Lovely stuff - what awaits our intrepid explorers in and around these ancient ruins....???
http://chicagoterrainfactory.wordpress.com/2008/04/16/quick-links-alkemy-jungle-board/
Posted by Paul O'G at 3:15 pm 3 comments: 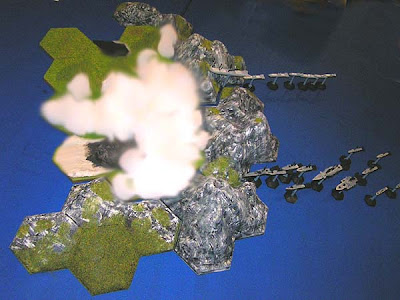 David (aka UnitRecon) from the WGVSF Yahoo group, has posted an Aeronef scenrio at his new SF website "Space Command".

Entitled "First battle at Bikini" it involves a standoff over a falled Asteroid between the dastardly French and an alliance comprised of the Japanese the heroic Australian Aero-Navy! Huzzah!

http://www.spacecommand.co.uk/aeronef/bikini1scenario.htm
Take the time to peruse the rest of this wonderful site - I think these guys play all the same games as me, and the images and graphics are wonderful.
Posted by Paul O'G at 3:14 pm No comments:

I somehow missed this while I was away last year.
Eli (of "I see lead people" blog fame) constructed these lovely aerofauna for his Aeronef campaign on Terra Secundus:

But not to stop there, Eli then inspired Tony (of "Dampf's modelling page" fame) to build his own, which you find find at his entries here: 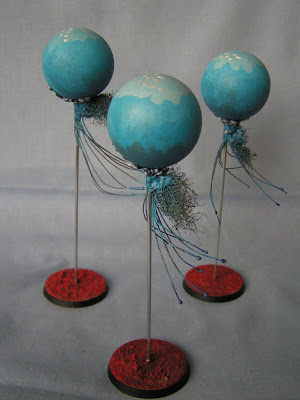 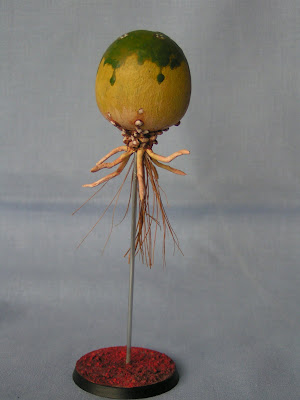 Some of Tony's fantastic creations

After much searching, I've finally discovered a source for terror birds in 15mm scale: 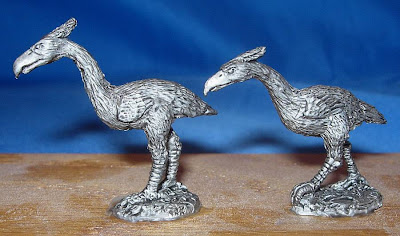 scroll down to the bottom here:

http://www.splinteredlightminis.com/miscellaneous.html
These will be just the thing to chase those intrepid explorers and hunters!
Posted by Paul O'G at 5:00 pm 2 comments:

A splendid chart of the home of Vanvlak Industries, just for Mssr V!
Posted by Paul O'G at 5:04 pm 1 comment: 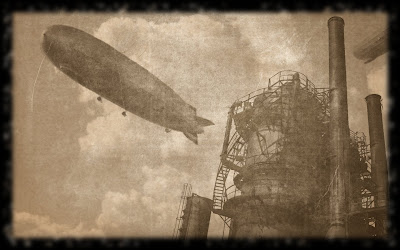 This composite pic was generated to be used as a steampunk themed wallpaper, but I like it all the same as artwork.
http://steampunkwallpaper.com/wp-content/uploads/2008/11/gas-works.jpg
Posted by Paul O'G at 4:12 pm No comments:

Looking to replicate the barren wilderness of the Hindukush but dont know quite where to start? These tutorials will be of great assistance!

which you can see here in action:
http://www.angelfire.com/games3/jacksongamer/grn_nile2.htm

Then there is this online tutorial by Esair which is nice and simple to replicate:
http://www.esair.baueda.com/guides1.html 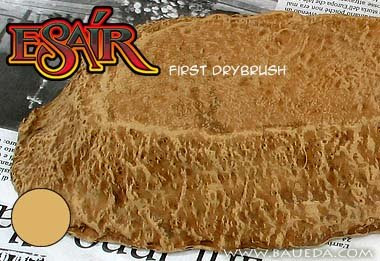 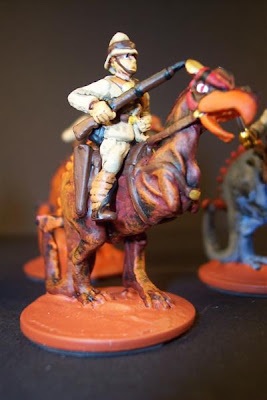 Well I trust you all had a smashing New Year, with plenty of bubbly, claret, post, brandy and a local lovely tucked under each arm!
.
I just found this stiring blog, detailing a group's recent VSF campaign game on Mars, as well features on aspects of their characterization of Frank Chadwick's Space 1889 universe.
.


.
I particularly like the Royal Gashant Corps (shown here on the right, pic from their blog site)- lovely stuff!
Posted by Paul O'G at 5:22 am 4 comments: