Indeed it was on this day two years ago that Yours in A White Wine sauce was created. Initially just a place for me to post pics of my VSF creations and be a bit silly, it has grown to be so much more than that - now other post their creations and we are all a little silly together! In that time we have made new friends, battled the vile Boche, sneered at the French and canoodled with Ladies of dubious virtue (not necessarily in that order actually) 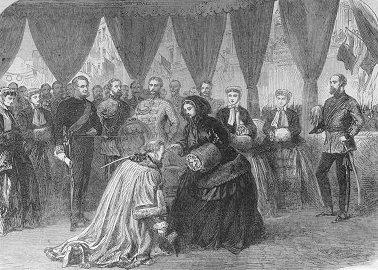 Furthermore, this week saw White Wine Sauce reach 25,000 hits since last August - a remarkable number which continues to astound me. Thanks for all the valued support, it is most appreciated.
To commemorate this double celebration, a great competition will soon start here. While the details of this super secret activity cannot yet be revealed, it will be cause for great excitment for VSF fans...
Evidently this excitment has already begun as the telegraph company employees are off the job - I was expecting a summons to Buckingham Palace to receive my Knighthood after all...
Huzzah!
Posted by Paul O'G at 6:21 am 9 comments: 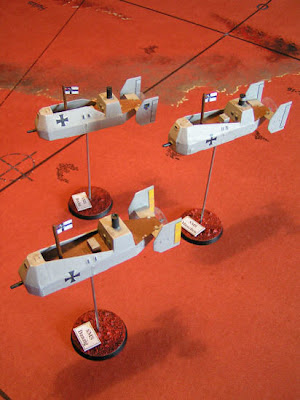 You may recall last year's greatworkbench article on building the USS Kearsage by panzerdampfwagon. This time he has built three smashing SMS Hamburg-class armoured gunships! Great Stuff - and the Mars terrain comes out great too

Notwithstanding the cultural divide that can sometime occur between residents of the Motherland and the denizens of the colonies, the recent conference in London can only be called a resounding success in every respect!

After serious deliberations in the dark corridors of various Ministries, Lord Royston's superb hospitality was most graciously offered and accepted. His personalised tours are highly recommended and only a French-loving bounder who wouldn't lift a finger to save his own Grandmother would decline such an offer!

Lord Royston also made several generous donations including vast quantities of reading material, examples of the bounty of England and other glorious things...many wonderous things that will be fed into the Tas Factorium to produce more war material for the Glory of the Empire!

Detail of this inaugural conference have been provided in other dispatches, but suffice it to say that such was its success that a second summit has already been scheduled. Perhaps a Maltese representative can attend this next occasion? Reason enough for a Grand Gala Ball it would seem.

Long Live the Queen, Damnation to her Enemies, and Huzzah for Lord Royson!!
Posted by Paul O'G at 5:16 am 2 comments:

With these exact words our very own stalwart of the Empire, Lord Royston of Rayleigh, greeted his opposite number from the Australian Naval Deputation, Commander Tas. Our readers may recall that Lord Royston had graciously offered to provide a welcome distraction fom the affairs of high office that the aforementioned Commander was engaged upon. For reasons of Imperial security few details of these high level discussions are available to the general public but suffice it say it can be guaranteed that closer relations with our Colonial comrades in arms is the happy result.

After the official welcome at Charing Cross and the exchange of gifts (including some hand made Stilton from the estate of Lord Royston as well many valuable building and reference materials whilst his Lordship was delighted to receive some typical Australian apparel as well as an addition to his family collection of stuffed animals in the shape of a Koala bear) - our two Imperial paladins proceeded to spend a most enjoyable day on an unofficial tour of the many book emporiums for which this particular corner of London is renowned. Several titles were acquired for the Australian Navy and the day also included visits to a number of gaming establishments as well as the famous Aeronef constuction yard at high Holborn, the world renowned Modelzone. Whilst en route the two gallant gentlemen paused frequently to take refreshment, especially the famous roast beef of England at the Marquis of Granby public house. Further halts for suitable refreshment were also held at the Princess Louise - where Commander Tas was delighted to make the reacquaintance of an old friend, Samuel Smith and finally at the Museum Tavern. The day ended in the shadow of the British Museum and it was at this point that a further token of goodwill was extended to Lord Royston by the presentation of a ceremonial medal and earnest good wishes for the future. His Lordship was visibly moved by this unexpected gesture although his regal bearing appeared to be as phlegmatic as ever. A resounding toast to the Queen followed amidst much steely eyed resolve and manly bearing.

In short, the brief but very pleasant diversion, enjoyed by those two most deserving pillars of the Empire away from the spotlight of duty, proved, in the most emphatic of ways, that whatever trials may face the subjects of the Queen, whatever foreign power deems it necessary to impose their evil machinations and intent upon this green and pleasant land, so there will be those upon whom the Empire can rely and trust in her hour of need. Be they in the firing line and facing an implacable for or maintaining the economic strength of our glorious Empire.

Huzzah for the officers and men of fair Australia's Navy!! Huzzah for the giants of commerce and finance!!
Posted by David Crook at 3:36 pm No comments:

All Sydney turned out to wish the special envoy to London a safe journey and success in formulating grand plans to destroy Her Majesty's enemies! 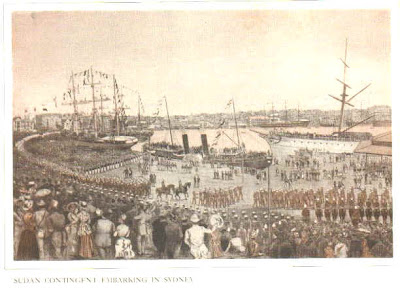 A period of communications silence is now anticipated until the top level discussions are completed in Whitehall...
Posted by Paul O'G at 5:17 am 1 comment:

Another stunning production by Vanvlak Industries! 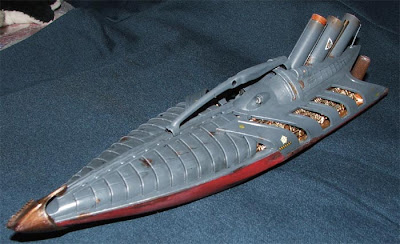 Following the destruction of the Nautilus on Mysterious Island, and the invasion of the Martians in 1898, the British Empire had commissioned its agents to collect what technological remains they could. The Mysterious Island expedition, supported by the RN, was organized by an organization which remains unrecorded, although it was rumoured (wildly) that Nemo himself had once been a member. The Martian remains were more abundant, and were collected under the supervision of the newly formed Torchwood Institution. Investigation of the heat ray lead only to disaster, but an improved method of joining metals and an enhanced steam power plant were successfully derived. A hybrid of these technologies and the brainchild of one of the leading designers and Vosper and Vosper, Jarvis Pennyworth, led to the construction of a high speed launch for reconnaissance and special missions. Four were built in great secrecy, and it is believed that a fifth, armed with torpedoes, was constructed and tested against a decommissioned warship. Believed to have been completed by 1905 (although some records indicate an operational record going back to 1903!), the boats were apparently continuously in high demand. One was lost to the Arctic ice packs; a second suffered engine failure in mid-Atlantic during a mission and was utterly crushed by the liner Majestic. A third blew up on a mine in the Eastern Mediterranean in 1916. Like her sisters the survivor, HMS Pippistrel, saw extensive service, and is believed to have served in the Mediterranean theatre as late as in 1944. A rare photograph was taken by an overflying Junkers Ju88, showing the boat cruising at high speed on what is believed to have been a clandestine mission from Malta to the Balkans. Of the fifth vessel, the torpedo boat, there is no further record. 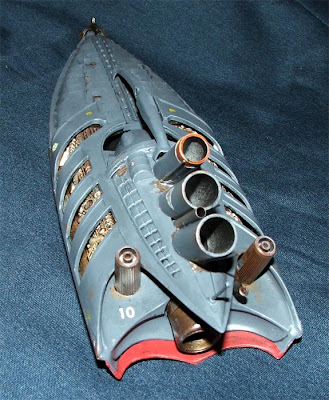 Powered by steam impulse engines, the boats were rumoured to be capable of cruising at 55knots. The louvres over the engine bays had to be opened to permit effective cooling, and closing of the gills in bad weather conditions forced a reduction in power, and consequently speed. The Martian-derived joining technology took its toll of the hull armour as relatively rapid corrosion was induced in the otherwise outstanding armour plate based on the Nautilus design. Plot hooks to boot:
This, and HMS Pippistrel link the boat to its model origins - a 1:24 scale Revell kit of the Bat Boat. I have faired over the cockpit to reduce the scale to 1:28; added the 3 funnels, and a few other odds and ends, including a bit of windscreen wiper over the cockpit.

She obviously (HMS is a dead giveaway) belongs to the Royal Navy, although, like her Aeronef counterpart HMAS Platypus has also seen service under the Torchwood flag.
Posted by Paul O'G at 2:03 am 4 comments:

A neat article on how to make simple but effective jungle features on old CDs:
http://www.rattrapproductions.com/speakeasy/viewtopic.php?p=4787 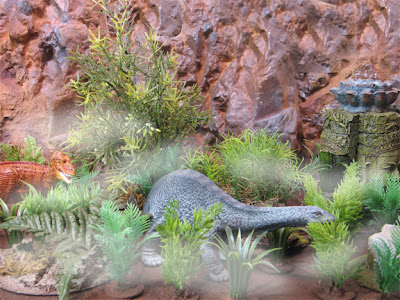 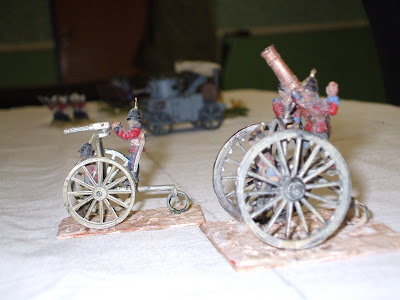 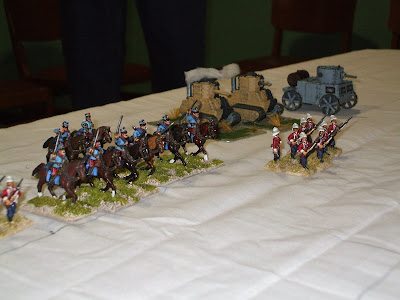 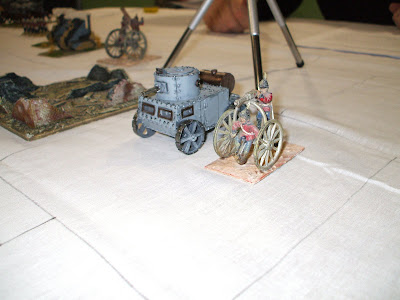 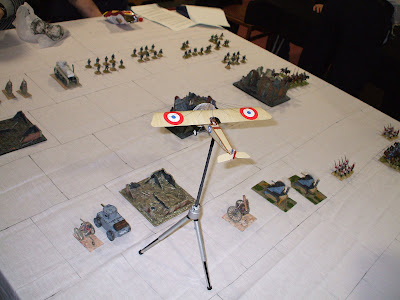 With the impending visit to our shores of a senior member of the Australian Navy it has been revealed that our very own bon vivant, raconteur, socialite and all round sportsman Lord Royston of Rayleigh has graciously offered to provide a day of entertainment for our esteemed guest, away from the rigours of high office. When interviewed for the local marconiphone Lord Royston, as befitting a man of such sporting prowess, had very kindly offered a day of shooting, hounds, fly fishing, bare knuckle fighting, fencing and boxing but, after consultation with the admiralty settled for more cerebral matters such as assembling the appropriate titles for the Australian Navy library and discussing the finer points of international gunboat diplomay and whether or not the liquid refreshment known as Boddingtons is in fact better than Shepherd Neame. Aeronef construction techniques and the future role of our gallant chaps when operating alongside such mechanical marvels as the Landship will also feature; albeit in a relaxed and informal atmosphere. This, and many other topics of equal import will provide a welcome relief from the serious duties that bring our cousin from across the sea to these shores.

Lord Royston, as was his wont, went on to say "All work and no play makes Jack a dull dingo or some such nonsense. The poor fellow will need some sport what?We will have a roistering session around some very genteel and cultured parts of this great metropolis (Lord Royston was winking furiously at this point, probably due to some old and tiresome eye injury gained whilst hunting on Veldt) and damnation to the Queens enemies!"

Well said in our opinion and if there is a man in the empire to provide a suitable days diversion than it must surely be that epitome of manly virtue, that paragon of fair play and victor across many a sports field and bar: Lord Royston of Rayleigh, KBC, VC, Order of the Golden Camel with crossed Palm Leaves, Croix de Guerre, Iron Coss, YIAWWS.
Posted by David Crook at 3:01 pm 2 comments: