Catalyst games has been showing off its new project- Leviathans: an alternate history miniatures game of air fleet battles set in 1910. For us that means more pulpy airship goodness!
(actually, Ive been excited about this one for awhile - see my post here: http://pauljamesog.blogspot.com/2008/08/leviathan-new-vsf-game.html) 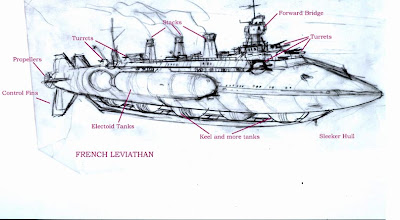 Over Togo's head the Zed flag was burning. The pride of the Japanese fleet, the battleship Mikasa, his Mikasa, was sinking. His aide tried to pull him toward the lifeboats, but Togo stopped and looked up. He saw the battered Russian leviathan claw its way into the blue sky. And at that moment Admiral Togo Heihachiro knew that Japan would not rule the east, after all. And one more thing. It was not the age of the gun.

It was the age of the sky.

There is also a promising new associated blog, "Monsters in the Sky" started up here:
http://monstersinthesky.com/
Hold onto your goggles chaps, this is looks to be a good ride! 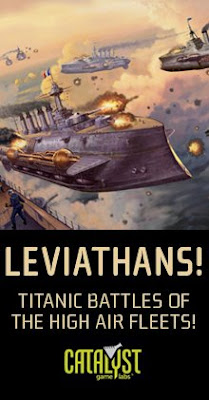