Lord Coxswain: The Man, The Myth, The Muttonchops 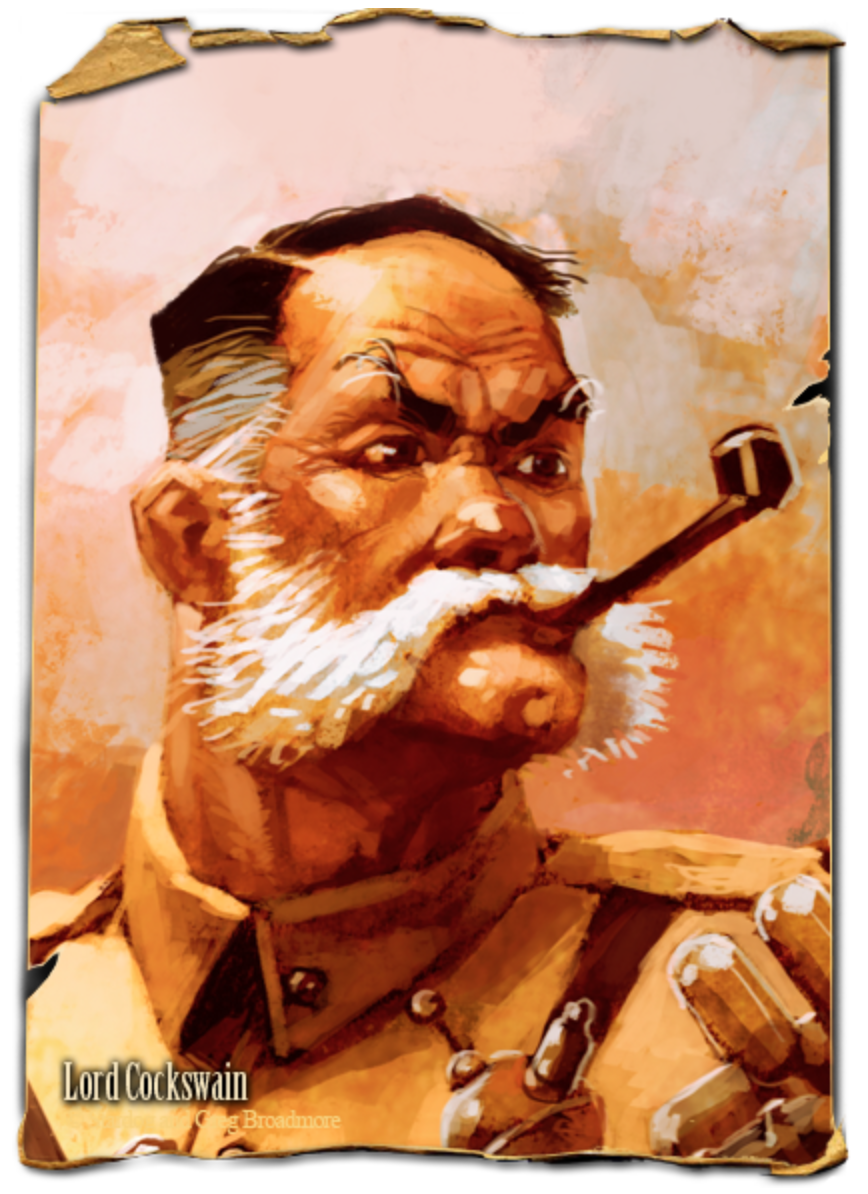 Lord Coxswain is a mysogonistic xenophobe of the great-white-hunter-who-shoots-everything trope and is thus hailed as 'undoubtedly Earth's greatest Human'.  Passionate admirer of dusky maidens and terror to Johnny Alien, he is at home in the Venusian jungles hunting down rebels and wildlife alike as he is crushing dissidents on the Moon.  He is the self proclaimed icon of humanitarian supremacy as he crushes all before him with his pith helmet, pipe and a brace of patented Dr Grordbort's contrapulations and ray guns. 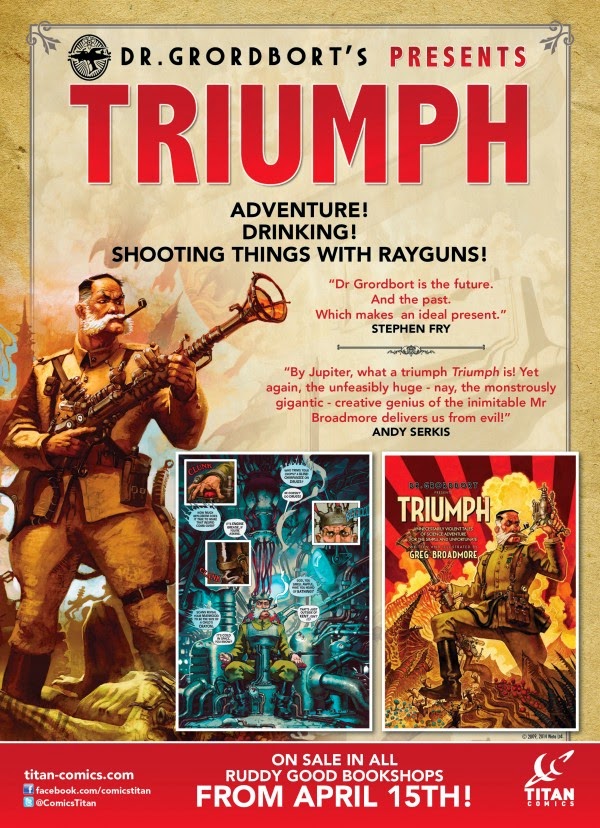 A former Navy man and a veteran of many minor tiffs and battles, his adventures are not for the faint hearted. Indeed they have been described as 'full of violence, bad language, interplanetary racism and a little sprinkling of smut, so you get what you pay for.'

So why am I bothering to describe this blatantly heroic chap?  Principally because he stars in a range of interplanetary pictures and books sponsored by Dr Grordbort himself.  'Victory', 'Triumph' and 'Onslaught' comprise the three books thus far. 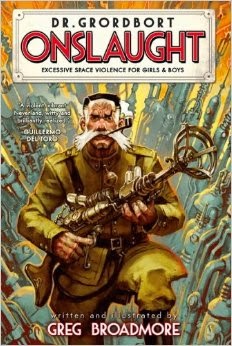 'Onslaught' is the latest addition to the series, but is also a bit of a compilation of the previous ones also so if you have the first two volumes you'll be familiar with a lot of it.  Nevertheless, these are a belly shaking journey through everything that is so right and wrong about VSF (though arguably this is WW1 era fiction).
He is so heroic, in fact, that he has his own beer! This was indeed made in New Zealand: 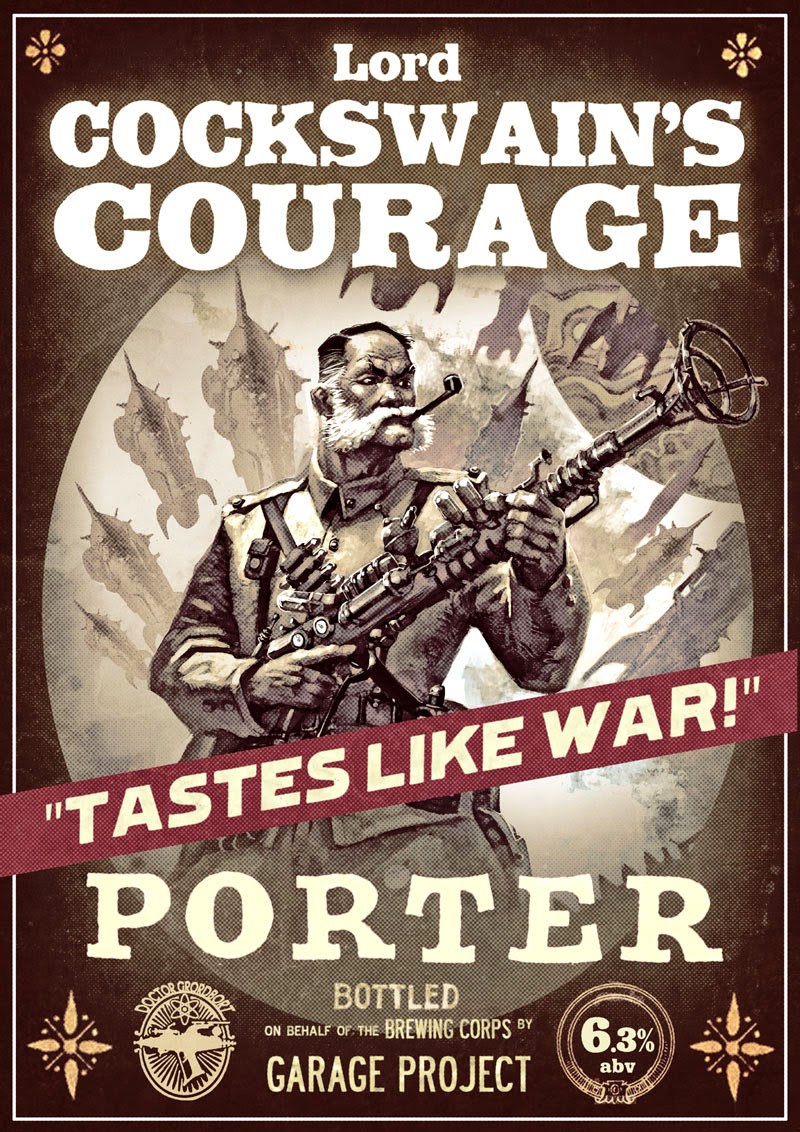 Let us be honest, it’s damned thirsty work for those smashing chaps of the Earth’s Armed Forces. Spending your days up to your danglies in mud and razor wire while bringing a bit of civilizing influence to those ugly Venusian brutes can leave a chap parched.
That’s where His Majesty’s Brewing Corps comes in. How’s your average tommy meant to go over the top if he hasn’t had a bloody good pint or two of warm bitter to get his ardor up! It’s brewing at the pointy end.
Believe me, you’ve not brewed until you’ve whipped up a cheeky little robust porter while crouching in a crater, swathed in chlorine gas and surrounded by angry Venusian spear chuckers. That sorts the men from the boys, I’ll tell you!
Want to taste Victory? Why not try a couple of the liquid offerings whipped up by the boys of the Brewing Corps?
Lord Cockswain’s Courage
Brewed using five different malts, Khargunthi hops, black strap molasses, bull’s testosterone and a thousand yard stare, Cockswain’s Courage is as black as space and at 6.3% abv guaranteed to warm the cockles. Rich and complex (unlike the lads in the Brewing Corps) there’s also a merry hint of toasted oak after some poor blighter’s wooden leg was blown clean off and landed in the fermenter!
It tastes like War!

I will most definitely be putting together a Company list for IHMN for Lord C and his cronies (who are inevitably short-lived despite a lack of a 'red shirt').  Lord C is typified here in action on a big game hunt on Venus;

A delicious grab bag of goodies for yours truly & son under the tree this year - far better than a lump of coal! You can see a definitely VSF theme going on here.  Review of the various books to come by let me just say that if you haven't yet discovered the Adventures of Lord Coxswain ("The Man, The Myth, The Muttonchops") I am sitting here chuckling away and now desperately searching for some appropriate figures... 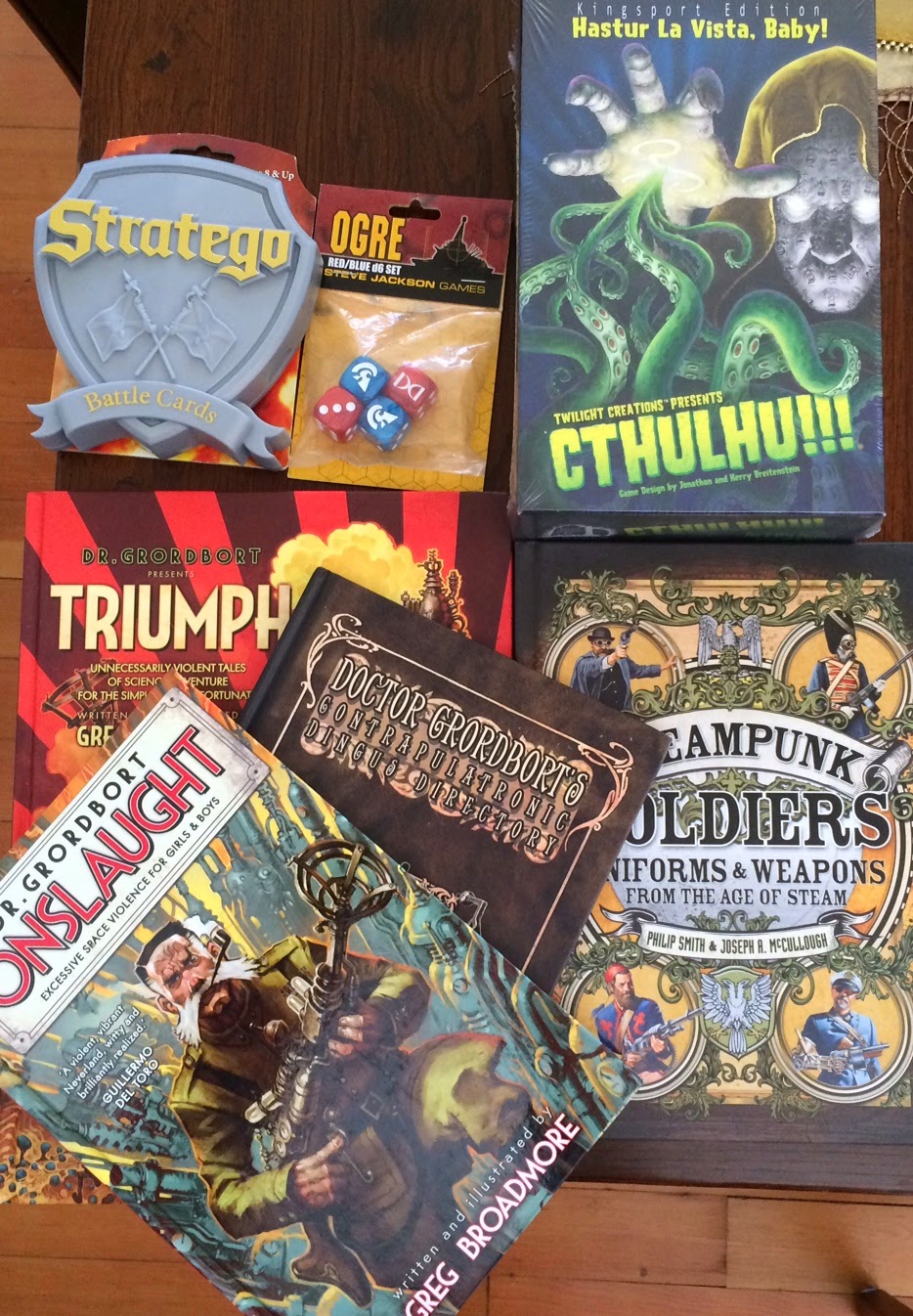 Warm Yuletide wishes to all! I just came across these lovely Russian and Japanese figures of RJW era, made by Tsuba Miniataures in Germany.  Just perfect for Victorian/Edwardian era VSF or colonial gaming. 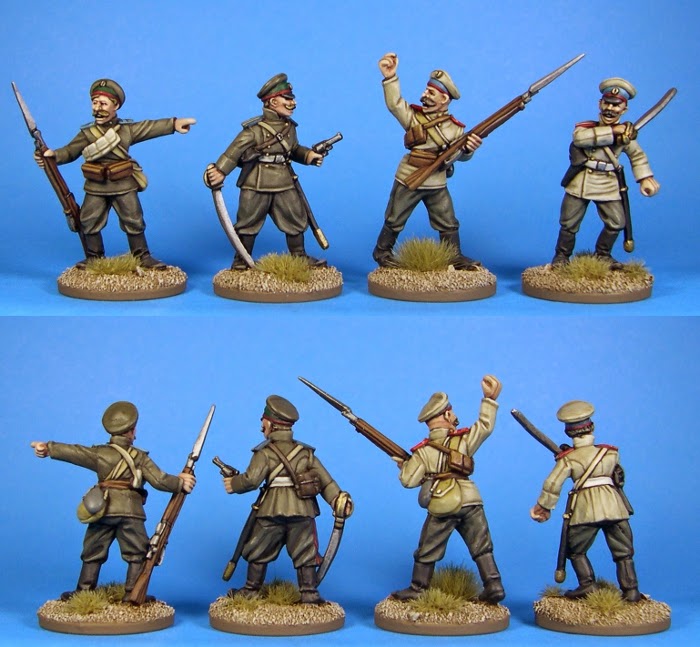 I've wanted to do a Russian Company for IHMN and think that these might be a great way ahead, rather than Russian Civil War figs (nice as they might be for Pulp games).  I'll just need to find some models somewhere for the obligatory 'over the top' and/or weird characters. 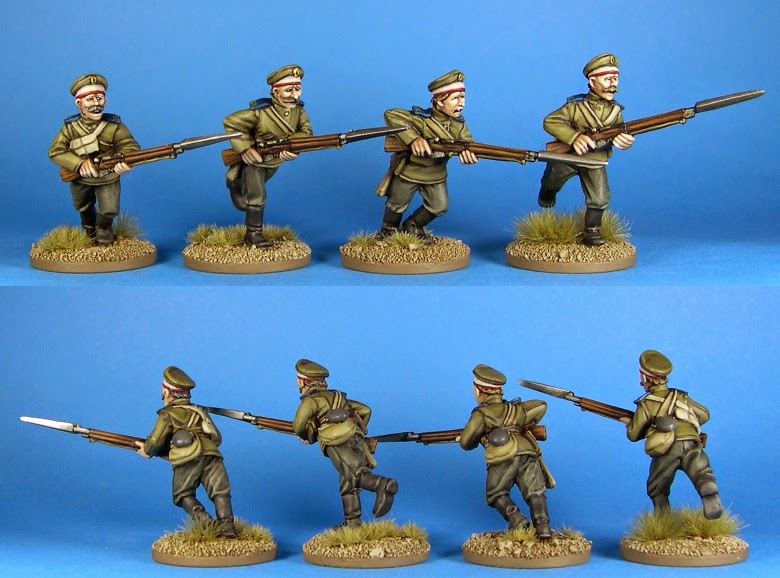 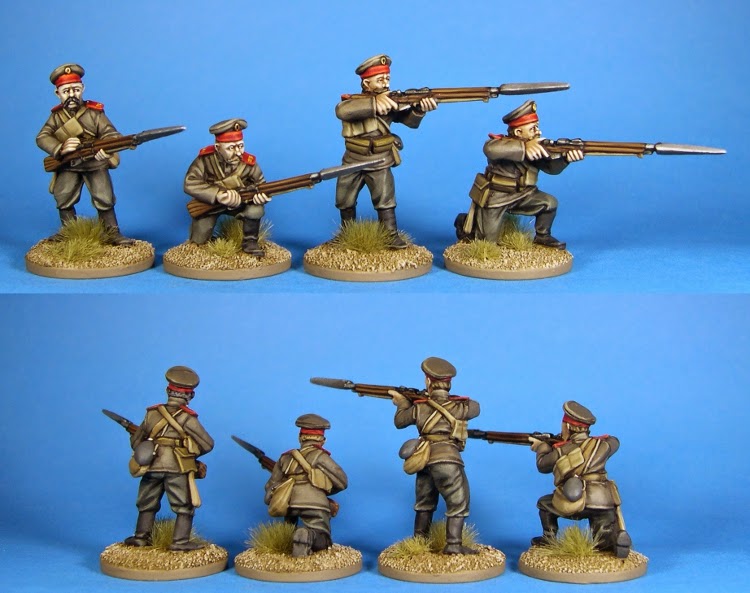 And for those desirous of a Japanese force, these are very nice too: 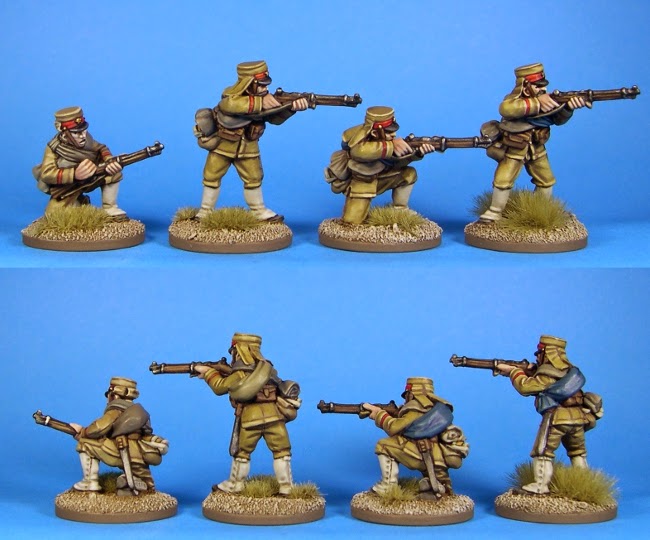 Japanese Cavalry figures will be added to the range early next year and I hope some Russian mounted troops will follow shortly thereafter.
http://tsuba-miniatures.blogspot.com/
Posted by Paul O'G at 7:00 am 9 comments:

Thanks to Steve Blease, who recently blogged this video related to War Plan RED which I did a series of posts a few months ago.

All I can say is... I Want One for Christmas! 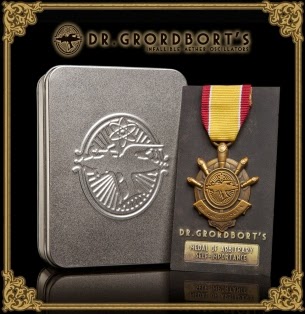 The Society for Interplanetary Cooperation and Cross-galactic Overindulgence held its annual prize giving in Carlsbad, Prussia this past Tuesday.
While the event itself displayed much of its infamous pompousness, the officers of SICCO this year left a legacy worth highlighting.
The Medal of Arbitrary Self-Importance – so named because it cannot actually be awarded by a third (or even second) person – allows time-space revellers on all wave-lengths to award those blatantly best deserving – themselves.
We are in no doubt that this medal – left unattended in a public space such as a Turkish bath, Ale house or brothel in your vicinity – would quickly make it onto the chest of a deserving (in their mind) individual.
We would therefore very much like to dispatch one to your premises forthwith.
Perchance you, Sir/Madame, would be a splendid recipient of such an award? It’s in your hands!
Regardless of the chest it adorns, Dr Grordbort’s(patrons and sponsors of the award) would be only too pleased to serve!
Comes in metal gift box container measuring 95 x 135 x 40 mm (3.7 x 5.3 x 1.5 in).
https://www.wetanz.com/medal-of-arbitrary-self-importance/ 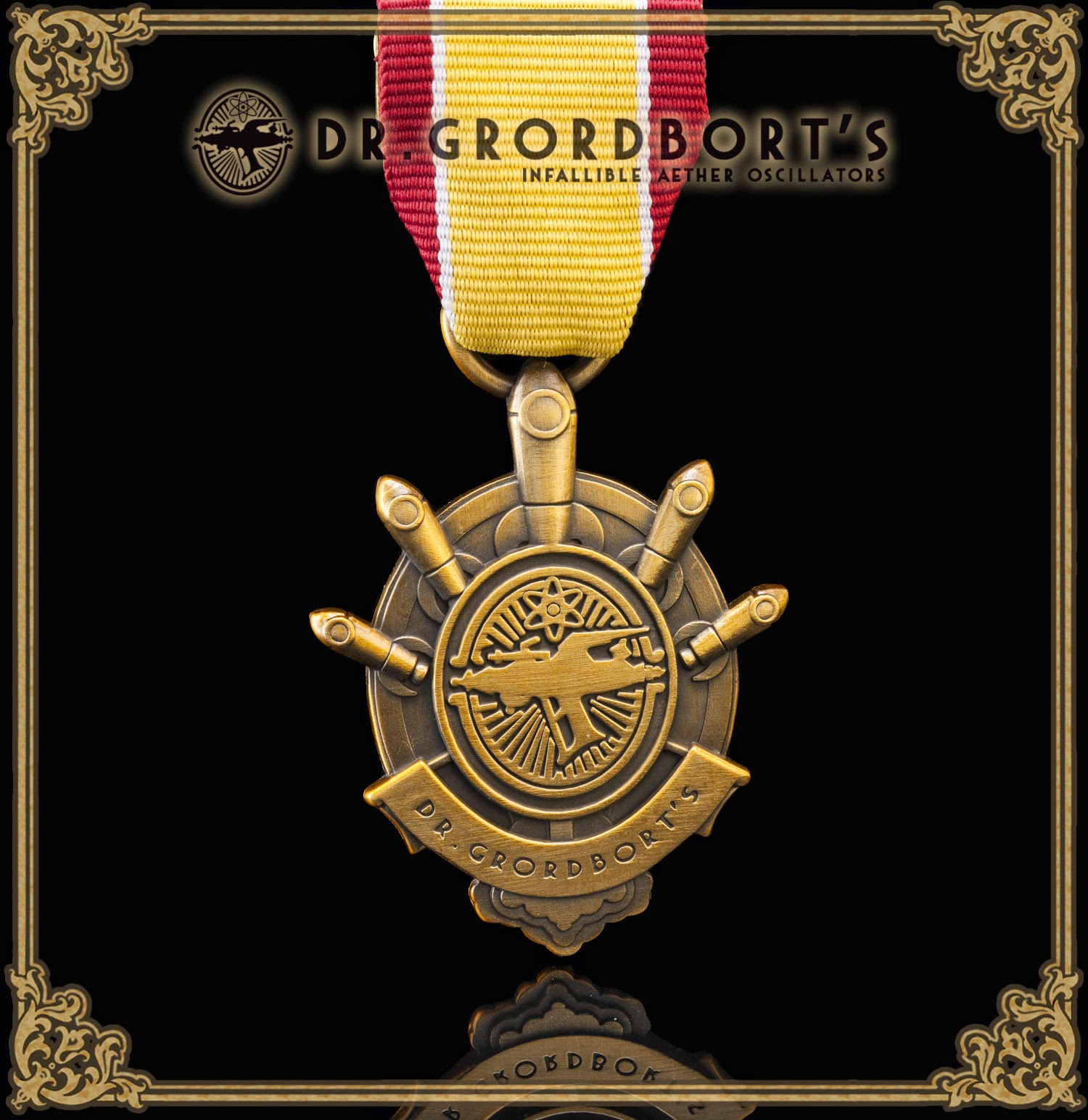 A new Aerostat from Tobsen

Tobsen77 miniatures (who make all sorts of steampunky goodies - see here) have released a new model for the discerning aeronaught.  Smaller and sleeker than their earlier version and now armed with not one but two Maxims, its clearly the dirigible of choice for the new season.  Don't be caught in last year's balloonary!
http://tobsen77.de/products/dompfaff.php 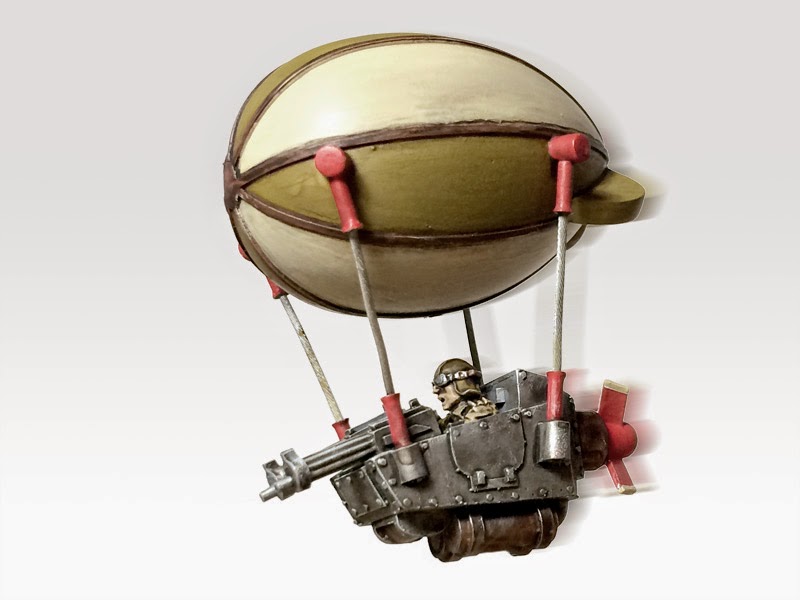 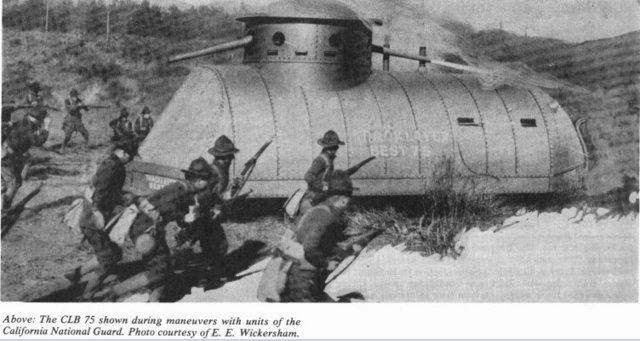 I came across this thread at the World of Tanks forum (via the Space 1889 Yahoo Group), which has some very interesting pic of developmental tanks which I hadn't come across before and the attempted application of steam for power.  Focused on US developments, its well worth checking out and has some great modelling inspiration.
http://forum.worldoftanks.com/index.php?/topic/236601-steam-powered-tanks/ 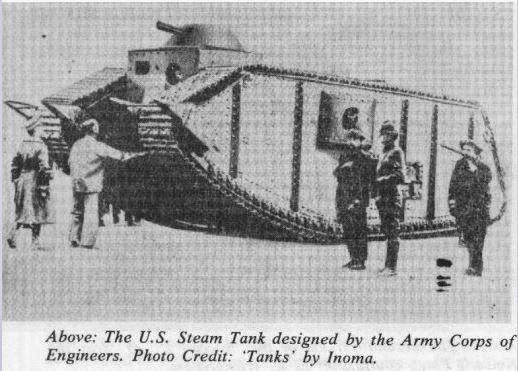