A year without a post here at the blog? Goodness me, what was I thinking? Entombed in a submersible vehicle with a mysterious Captain of unknown origin I was. Lucky I have now resurfaced with the arrival of Nemo's War 2nd Edition - and worth waiting for it was too! 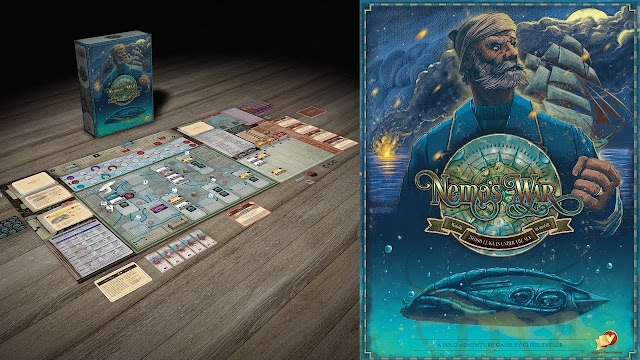 I'll do a full review in due course but first impressions are: WoW! The opponents are fantastic and this game has gotten the warranted lavish attention it deserves. Its clear from the multiple victory conditions, difficulty levels, upgrade options, counter mix and large card deck that this game has lots of replayability too.  Games are reported to last 1 to 1.5 hrs in length.

Non KS backers will appreciate that the vast majority of rewards were realised in upgrades to the core game, so with the loss of only two token bags you get everything else. One particularly nice addition is the plastic Nautilus model instead of a counter.  Pics of some very nicely painted ones are appearing at BGG and with only the one model to do it wont take as long as your other wargaming forces! 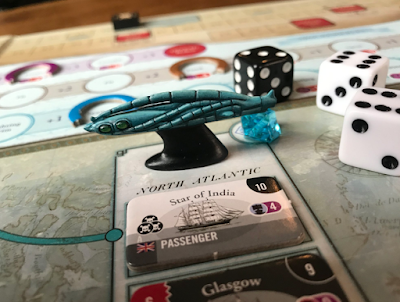 And finally, I really liked the attention put into the ship counter mix.  The Warships are all historical with accurate silhouettes etc, building a greater level of enjoyment than generic Frigate/Cruiser etc. And I was thrilled to see a certain Victorian Monitor make an appearance! 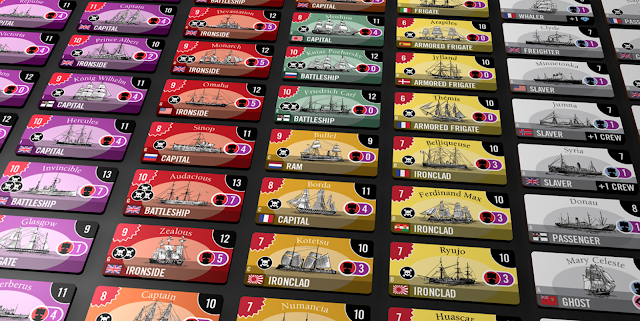 And finally, this new edition has a co-op version allowing it be be expended from solo play up to 4 players. Haven't tried it yet but it sounds interesting - I love coop games.

So first impressions are: Well worth the wait! And there are already rumours of booster packs being developed by the authors with additional cards, motivations and crew counters...

EDIT: A rumour no longer - play testing has already commenced!
https://www.victorypointgames.com/news/nemo-booster-packs-playtesting/
Posted by Paul O'G at 8:20 am 5 comments: