Nemo’s Note in a Bottle

VPG have released an update on the 2nd edition of Nemo's War, now in development. Some may be dismayed about the use of Kickstarter, but nobody can deny the beauty of the components and new artwork.

By Alan Emrich
Susan, my friend in Jr. High and High school, was pretty and she was real-life a model; not the high fashion runway type, but a model posing for store catalogs, commercials, and such like. She was sweet and I wished her well as we went our separate ways after High School.

Fast forward to our 10-Year High School Reunion, which she attended – only now she was drop dead gorgeous. She had more fans around her than a Turkish harem, but she waved me over and wanted to find a quiet place for us to talk. She remembered me as a good listener, and she wasn't very happy; now competing at higher-end modeling, it was taking its toll on her and replaced much of her sweetness with bitterness. But that sweet girl I remembered was still in there somewhere, right? So I asked her about her life and listened while she vented. She really needed to let off steam and complained about the time and cost (monetarily, physically, and emotionally) of working so constantly and so strenuously to look beautiful. Being a guy, I had never really thought about that aspect of a model's life, but I remember how she summed it all up so succinctly: "Beauty is Pain."
Now, teaching art students, I often remind them that great artists must suffer for their art. If you want to excel at anything, if you want to achieve any kind of greatness or fame, sacrifices are required.
So my thoughts were firmly on the accomplishment (and its incurred pain and the suffering) of artist Ian O'Toole as we printed the first copy of Nemo's War second edition. Ian had outdone himself on the graphics. This game left VPG playing sweet, and came back looking drop dead gorgeous. As we sat around the luscious graphic presentation of Nemo's War second editionthat Ian had created, we felt about 20,000 leagues out of our depth and knew that Ian's presentation of this game promised a great adventure ahead. Staring back-and-forth at each other over the table displaying Nemo's War second edition exactly as Ian envisioned it, we came to the realization that our print-on-demand publishing model would not do this game's beauty justice. We would do a very good job with it, certainly, but it deserved the right printer to make everything publish as perfect as it looked.

Aboard the Nautilus, our heroes discovered Captain Nemo's motto was mobilis in mobili (moving in a moving thing), and that is what we were prepared to do with our print-on-demand version of Nemo's War that we intended to publish – get moving! But the look of the game that came back from Ian suggested a new motto for Captain Nemo: orbis non sufficit (the world is not enough). And so, after sufficient consideration, we have decided to print Nemo's War second edition out of house and raise the funds to do so via Kickstarter. This affords us the opportunity to really do right to Ian's art and Chris Taylor's design. This is a game that we can really showcase; beauty is pain, art is suffering, but the end crowns the work, and so we will go to the extreme to deliver the best Nemo's War game possible.

Nemo's War is a solitaire strategy game based on the roughly year-long adventure from Jules Verne's classic novel, 20,000 Leagues under the Seas. Featuring compelling narrative gameplay supported by strong visuals, the push-your-luck resource management system is packed with replayability and features four games in one based on Captain Nemo's different motives (Science, Exploration, Anti-Imperialism, and War!). These motives determine the type of experience you will have and the victory conditions you must achieve. As notoriety of the Nautilusand those aboard evolves from strange sea monster to enemy scourge, the pressure from the Imperialist powers filling the oceans builds to one of five possible finales punctuating the end of your adventure. At last, you can score your gameplay and read your story's epilogue. Thoroughly researched and skillfully crafted by those with a passion for this subject, the Nemo's War second edition team is thrilled to share with you their magnum opus, a true labor of love dedicated to adventurers everywhere.

"First Officer, a Status Report, if You Please, Sir."

And so the Nautilus begins a new voyage – from print-on-demand to professional printing by way of the Kickstarter Seas. Navigating by compass, pocket watch, and dead reckoning, the port this game just left and the one it's heading for look like this…

more than two sheets of die-cut counters, and at least 60 poker-size cards. Other things that a Kickstarter campaign can bring in as stretch goals include content beyond a second edition of the original Nemo's War game and its expansion kit – such as additional Nautilus Upgradecards, an additional Finale card, lots of new Adventure cards, and we're even working on creating our first plastic miniature game piece (which will be the Nautilusas envisioned by Ian O'Toole himself).
This means sending the component artwork for the game back to Ian for a refit, to rejigger the counters to go from laser-cutting (which is a very tight and precise layout) to die-cutting (which requires plenty of space around the cut pieces) and to make the play area a unified game board. Ian is currently hard at work rolling on the Refit table while also sketching out the game's cover.

But while Ian's shipyard is in Perth, Australia and busy working on the Nautilus, the crew is in Costa Mesa, California, and are making the most of this down time. We have been diligently putting that printed gamma version of the game through its paces (above you see Jeremy"Darkest Night" Lennert giving it a go on a marked-up build of the original print-on-demand components). We're triple-checking all of the rules and set up instructions (additional blind testing has found some good questions that the manual could have answered better and those have been fixed), working on some additional stretch goal material just in case (our last two Kickstarter campaigns greatly overran their stretch goals, so we're going to make sure we are ready this time), and we are tweaking some of the numbers here and there to tighten up the play balance and ensure interesting trade-offs in every player decision. We are also pumping up the fiction in the game epilogue paragraphs and writing additional support material.
So, on both sides of the world, we have all hands on deck preparing and polishing up the Nautilus for your inspection on Kickstarter later in autumn (if all goes according to plan). Brace yourself for a solitaire adventure game of a lifetime: Nemo's War second edition.
Posted by Paul O'G at 11:50 am 4 comments: 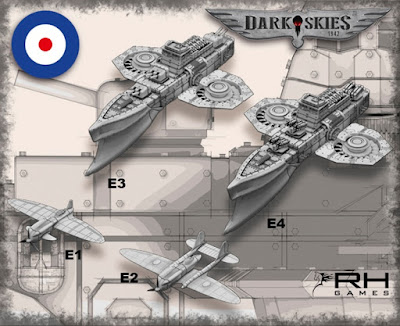 This is clearly a Crimson Skies inspired reboot of WW2 aerial gaming, but I think a few of these craft would make a fantastic  basis for some VSF style platforms.  Have a look at the Kickstarter page to see all the potential offerings.  One hopes that if the project is successful, individual craft might become available in the future. 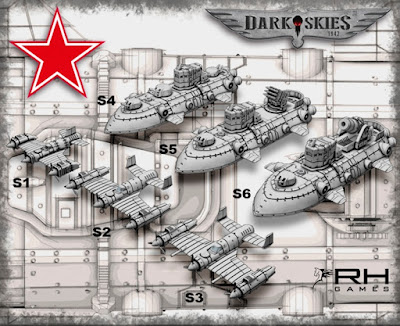 Hot on the heels of the release of the lovely Hansom Tank (see here), Westwind presents the HMLS GLADSTONE.
A lovely bit of kit to be sure, but one does have to wonder why a Royal Navy landship has a crew in Army uniforms... 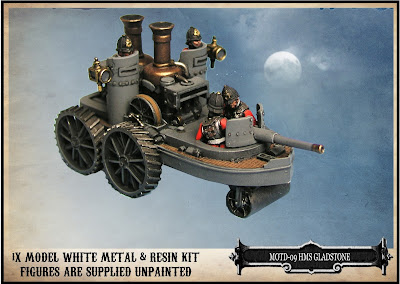 Not to be outshone by the Army and its dammed Tankovsky, the Royal Navy commissioned the Jerusalem Iron Works to construct a new class of Ironclad - 'HMLS Gladstone!' It was the first in this new class of Land Battleship. ''We will take the Navy to the enemy wherever he hides, the lack of a sea will not be an obstacle!'' so said First Sea Lord and Admiral of the Fleet, Sir Arthur Hood.

HMLS Gladstone first saw active service in the Anglo-Zulu war of 1879. However it did not distinguish itself in combat as it became stuck fast in the Buffalo river close to a small outpost known locally as Rourke's Drift. What became of the crew is unknown! 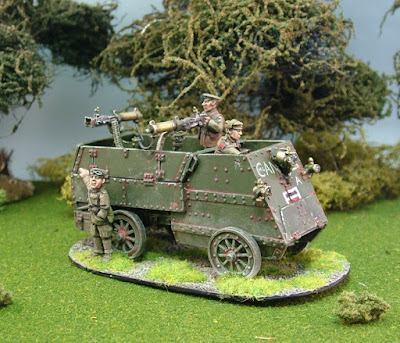 Saw this little gem the other day thanks to the Space1889 mailing list (thanks for posting the link Terry) - a splendid Canadian WW1 Machine Gun Carrier.  Comes with 3 crew and 2 Vickers MGs - perfect to provide a bit of hard hitting support to any IHMN companies (or on the Red Planet for that matter!)
http://www.1stcorps.co.uk/buy-online/p/ww1v16-canadian-armoured-car/
US Stockist here: http://www.scalecreep.com/catalog/index.php?cPath=3723_1479_3403_3404 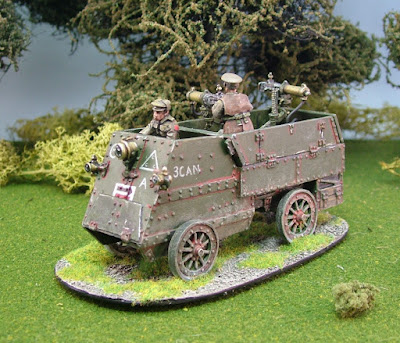 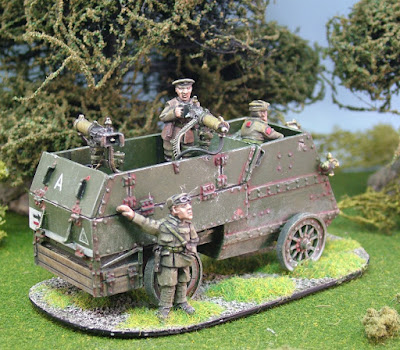 First Corps have a fantastic array of other WW1 vintage armoured cars in their lineup too, well worth your time perusing.
Warning - this will be hazardous to your wallet!
Posted by Paul O'G at 7:30 am 5 comments: