Good God man - has it really been a year since a dispatch was last posted?  We were adrift in the Aether you know while dispatched on Her Majesty's service, but have now returned. Indeed a new VSF project beckons but I'll keep Mum for now as it develops - wouldn't want the Kaiser or the Tsar to get word of it.   But it does involve Mars, Airships and gashants with a few of those new fellows down at the club providing some inspiration and opposing forces...

In the meantime, some news regarding that mysterious and boreboding planet: 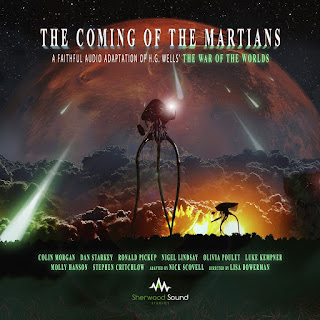 The Coming of the Martians

The Coming of the Martians is our full-cast faithful audio dramatisation of H. G. Wells’ original 1897 martian invasion story The War of the Worlds.
Since it was first novelised in 1898 there have been numerous adaptations in various media formats. However, none of these derivative works have been truly faithful to the original story or the tone that Wells established.
Our adaptation, presented as an audio drama in surround sound, retains the dark and often horrific nature of events and faithfully recreates scenes as closely as possible without the need to alter the original story. We retain the late 19th Century period and the southern England setting and give the story a fantastic cast of actors wonderfully directed in a production that sounds incredibly realistic!
https://www.sherwoodsoundstudios.com/the-war-of-the-worlds/ 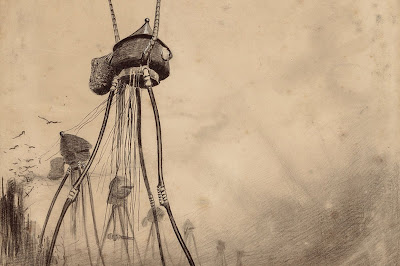 Earlier today, the BBC announced a number of new shows, including a three-part series based on H.G. Wells’ novel The War of the Worlds. The show is scheduled to go into production next spring, and it appears that, unlike most modern adaptations, it will be set in the Victorian era.
The series will be written by screenwriter Peter Harness, who adapted Susanna Clarke’s Victorian-era fantasy novel Jonathan Strange and Mr Norrell for the network, as well as a handful of Doctor Who episodes. The North-West Evening Mail has some additional details, quoting Mammoth Studios Managing Director of Productions Damien Timmer as saying that while the film has been adapted many times, “no one has ever attempted to follow Wells and locate the story in Dorking at the turn of the last century.” The project was first announced in 2015, and today’s confirmation of production comes only months after the book entered the public domain.
The novel follows an unnamed narrator as he watches a series of shooting stars, which turn out to be vast metal cylinders containing Martian invaders. The aliens attack the assembled humans and begin a conquest of the planet, only to succumb to human diseases.
The War of the Worlds is one of the more important works of science fiction out there, and its period setting is important to the original story, as it’s part of an entire movement of fiction dubbed “invasion literature,” in which England is gallantly defended against hostile outsiders. It will be interesting to see how and if the series addresses the politics of the novel’s era, and how they relate to the politics of England and Europe today.Since the novel’s release in 1898, there have been a number of film, television, and radio adaptations, but with only one exception, most productions updated the novel to contemporary times and settings. The 1953 film took place in Southern California, while the 2005 Steven Spielberg adaptation was set in New York. Even the famous 1938 radio play by Orson Welles shifted the location to the United States. Only a direct-to-video adaptation called H.G. Wells’ The War of the Worlds retained the period setting.
https://www.theverge.com/2017/5/4/15551306/bbc-the-war-of-the-worlds-tv-series-peter-hartness
Posted by Paul O'G at 3:01 pm 3 comments: