Magnificant Men in their Flying Machines!

Well Chaps today I thought Id tell you about a veritable fleet of Aerial Frenchies I saw once while travelling to Gibraltar to catch up with an old drinking-companions down on "the Rock".

Anyhow, the Squadron serenely floated by and an impressive sight they were too! A learned (and handsomely groomed) Naval collegue informed me there was a Battlecruiser, a Heavy Cruiser, a pair of Light Cruiser and 2 pairs of escorts. I must admit that I wasnt sure, but most naval men are intelligent chaps so I'll take his word for it

Shortly afterwards we saw this slower moving platform, which I was again reliably informed was a 'Monitor' - an aerial vessel with batteries designed to prinicpally fire downward. Given that would put me and my drink cabinet in considerable danger, I hope to never see one of those overhead!

There are other pics of this chance encounter with these flying frenchies in my photoalbum here: http://photobucket.com/albums/d170/pauljamesog/Aeronef/
(All models painted by me, supplied and manufactured by Brigade Models)

Excellent, more old Comrades from past Regiments, Adventures and frollicks!

Havent seen you since that Bordello burnt down under mysterious circumstances in Valetta and you ran off with that dusky maiden John!
And last we saw of you Max was when we set off that cracker in the clacker of your camel and he shot off across the Egyptian dunes at high speed. That was back in '76 I think before we shipped out to see off the Zulus. Ahh good times...

Welcome to the Mess dear Chaps! 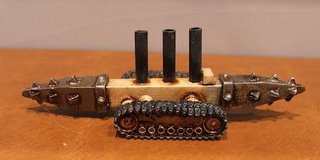 Well, well, well, and what have we here? Nice to see you around, old sport, although this white wine business is a trifle continental, what? And greetings to you to, Mr. Smelchak, this is jolly entertaining.
I've got my own little blog around these places, too, old sea dog - a little thing I've dashedly forgotten to update recently, tsk. What with all these Knights and order types and their tin-pot Land Ironclads, it's been a terse few days. No sport!
Wel old chap, with a standing invitation to visit Vanmulikan, which is none other than my house and castle on Bloggery-Bank, I really must dash, old man. So toodle-pip, and as they say in your parts, cheers. Or is it Kookaburras, what?

Mazel Tov with your new blog!

I can't wait to read more about your Wellsian Martians, aether ships and VSF mechanical contraptions!

P.S.
I don't know how much I'll have to add, but I'll give it my best shot!
Posted by MaksimSmelchak at 8:19 am No comments:

Wonders of the World


Right then Chaps, what wonders have I seen of late? In my travels around the Far East, the Asian subcontinent and throughout Europe I have had many adventures and one or two unfortunate infections that finally cleared up. But the important thing to any military man is to look good in front of the Men the next day and to have a nice photograph of the occaision.

Anyhow, you'll find in my photoblog album link (next post) a summary of the military marvels I've seen to date:

* The dastardly Prussians, but clever in their choice of colours and one has to hand it to them for whupping those darn Frenchies a few years ago
* The amazing new Krupp Elektro-Kanone
* German Steel Cavalry Contraptions

There are also some very hush hush photos of some of those unsporting Martin critters and their Tripods. My those Heat-Rays did pack a wallop. Dont tell anyone youve seen them eh what? Thanks awfully.

Anyhow, have a look and we can chat after the Mess Dinner
Posted by Paul O'G at 5:25 am 1 comment:

My archive of amazing picture photographs may be found here http://photobucket.com/albums/d170/pauljamesog/ 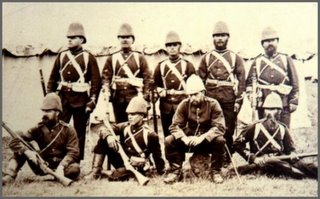 A new Officer, reporting In! 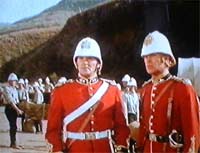 Time to find a cabin, unpack my kit and get the mess steward to fetch me a very large GnT...
Posted by Paul O'G at 4:52 am 1 comment: